PARLOUR: a space to speak – bringing together research, informed opinion and resources; generating debate and discussion; expanding the spaces for women in Australian architecture.
In public / Opinion & analysis / Representation / Reviews

Reading Artforum’s latest issue, Karen Burns falls through a gap in time – between a sophisticated account of identity and the antiquated myths of architecture. 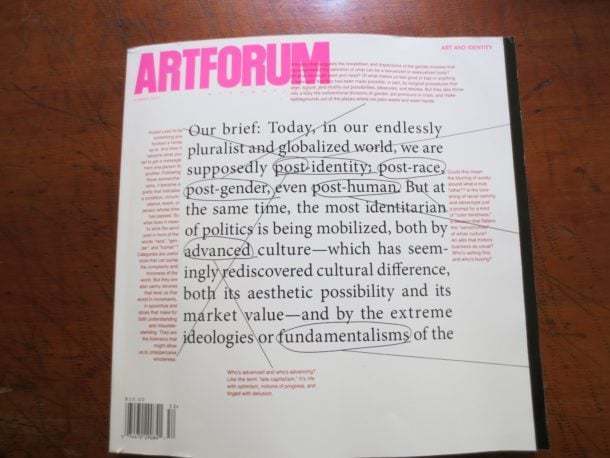 I’ve just bought your latest issue and want to thank you for a fantastic investigation of identity. The complexity of our ‘post-identity’ world is immediately signalled by the striking Barbara Kruger cover. In fact, it was the cover not the contents that first caught my attention in the local news agency. I bought on impulse.

At the local coffee shop I eagerly read the roundtable on ‘the shifting coordinates of identity’ as seven distinguished art historians, scholars and critics discussed the issues. My brand new copy of your magazine is now heavily underlined. 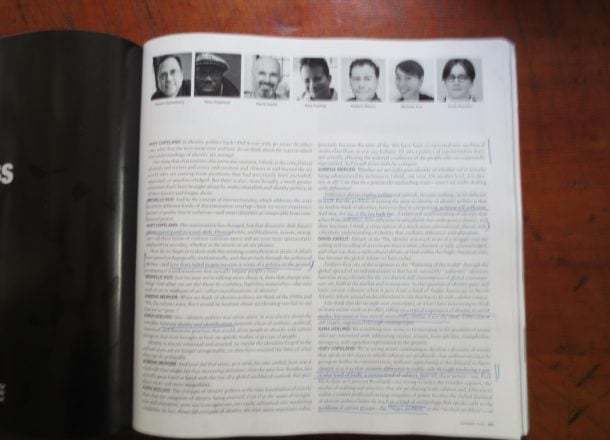 Artforum’s editor Michelle Kuo asks, ‘Just because we’re talking about it, does that change anything?’ She distinguishes between institutional, educational and discursive discussions and ‘how that’s failed to gain traction in terms of a politics on the ground’. This is an important point about the gap between the complex interrogations of identity categories of race, gender and sexuality conducted within the academy and white box gallery spaces, and the conditions of everyday life that have given birth to the new protest practices of what Emily Roysdon in the same roundtable calls ‘identitarian activist groups like Black Lives Matter’.

Parlour, the group to which I belong, is also an ‘identitarian activist group’: it organises equity in architecture around the category of ‘women’, despite being aware of the many differences between women. Roysdon notes that, even in our ‘newly complex moment’, groups like Black Lives Matter (and I would add Parlour) are still struggling with the ‘same structural oppositions’. This last phrase I think means two things. Firstly, that despite our attempts to complicate any single identity category by examining overlapping kinds of discrimination – an insight enabled by the term ‘intersectionality’ – long-standing dualisms continue to organise and structure identity: black/white, woman/man, Anglo/other. People often find it difficult to notice, examine and then discuss the effects of overlapping identities. Secondly, even fifty years after the emergence of the civil rights movement and the women’s movement, deep-seated structures of discrimination remain. Progress for marginalised groups has been slow and provisional. An insight into how and why these structures remain so resistant to introspection is gained at another point in the roundtable when art historian Huey Copeland observes, that ‘so often, it’s artists marked as different who become the vehicles through which to talk about these issues, as opposed to artists who seem to have a neutral identity, when, in fact, those identities –’ ‘are never neutral’, chimes in Michelle Kuo to finish his sentence.

Imagine my delight and then shock to discover in the same issue, an eight-page obituary of Iraqi-born architect Zaha Hadid written by six men. The first piece, by Mark Wigley, is a sophisticated formal analysis of her work but, towards the end, he discusses Hadid as a media figure who ‘equal measures of admiration and irritation’, noting ‘the very presence of an Arab woman on the biggest stage, seemed to incite a constant oscillation between admiration and thinly disguised resentment’. Wigley suggests that finally the work itself provoked the most ‘intense reaction – which is the ultimate compliment’. But even his words suggest that buildings and body were never so easily disentangled. As Despina Stratigakos observed in her obituary of Hadid, after Zaha Hadid won the Pritzker Prize (architecture’s Nobel) journalists focussed on her looks and personality. In her recent book Where Are the Women Architects? Stratigakos elaborates on this claim, noting that, ‘not a single journalist failed to mention her gender’. She quotes from some of these pieces: ‘workaholic and single’, a woman of ‘earthier appetites’ with a fondness for ‘lamb’s testicles’ and ‘where is the vibrant monster I’d been promised?’ The language of the journalists helps us refine Wigley’s description of the emotions he calls irritation and resentment. We can call them misogyny and racism.

All the other obituaries are leavened by personal reminiscence and friendship. Remembrances of the recently departed by bereaved friends may not be the place for forensic investigations of the structures that shape the lives of women in architecture. But both Bernard Tschumi and Frank Gehry’s pieces touch on these broader issues. Their remarks gave us some insight into how those who seem to have a ‘neutral identity’ as Copeland calls it, see those for whom identity is not an issue that can ever be avoided. Gehry acknowledges Zaha Hadid’s unusual prominence by noting that almost half of all architectural graduates are women, but these numbers are not translated into an equivalent proportion of practising architects, nor do many women enter the ranks of leadership, opining:

‘leadership is still mainly male. Zaha was the exception, and she became a model. She had the confidence, talent, and a willingness to jump into the fray. She would not accept a secondary role.’

Zaha Hadid spoke publicly of the confidence instilled by her affluent, cosmopolitan, intelligent and talented family of whom Bernard Tschumi paints a vivid portrait in these pages. Gehry’s remarks perform a familiar refrain in contemporary architecture; acknowledging the disappearance of women from the profession and their under-representation amongst leaders, yet without an accompanying discussion of the structural forces producing absence and loss. Zaha Hadid’s unusual advancement is causally attributed to her own determination.

If anyone had wanted to do a little bit of investigating they could have easily found the slew of institutional reports, academic books and articles and even the online Stratigakos obituary of Hadid citing some of the evidence-based explanations for women’s minority status in architecture: the overt and covert assumption amongst architects and client groups that leadership and design skill are male attributes; a masculinist working culture of long hours and presumption that care giving duties are evidence of a lack of commitment to architecture; an internship culture of unpaid work that helps keep minorities out; a ‘hazing’ culture that prizes intensely ‘robust’, aggressive attitudes and personal, verbal criticism; a competitive profession freighted with an oversupply of young architectural workers and an undersupply of commissions for architects. And perhaps lastly, the belief that the obituaries subscribe to: that measures of success and failure in architecture can be attributed to individual agency alone. Perhaps these are the things behind Tschumi’s description of the ‘alpha male architects, and conservative, even chauvinistic, clients’ that Hadid faced, but even architects come off relatively well in this comparison. A refusal to see architecture as a social practice, benighted by the same prejudices that bedevil most areas of cultural and social life is a wilful amnesia, a refusal of responsibility: to own, name and acknowledge one’s own role in perpetuating the structures that have allowed architecture to remain a bastion of the culture that other contributors to this journal call ‘mostly white elite’. (p.114)

Slipping between the roundtable on identity and the obituary pages I fell through a crack in time. Zaha Hadid has entered history, but the voice and beliefs of the profession that shimmers in these pages betrays an antiquated investment in mythic narratives. I’m not asking that the lovingly written portraits and heartfelt loss of Zaha Hadid’s friends should have been weighed down by earnest analysis of architecture’s ‘women and minorities’ problem, but one scholarly piece could have been included to address these issues and connect them to Artforum’s fine dissection of the interplay between identity and identification; between how we see our ourselves and how others construct us.

PS. There are a few people you could have asked: Despina Stratigakos, Lori Brown, or Lynne Walker and Susanna Torre (the last two have toiled for forty-five years on these issues), Jane Rendell, Rosa Sheng, or those of us here at Parlour. We’re not short of women who can write about Zaha Hadid and women in architecture, but instead you found six men to memorialise her.