Come into the Parlour

Don Gazzard ponders the status of women in architecture over the decades and outlines Parlour’s important role in challenging inequity and working towards improved conditions for all. 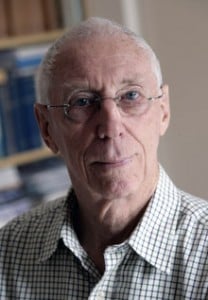 I met two formidable women recently who are part of Parlour, a new group that aims to bring about changes for women in the architectural profession.

God knows the profession needs change in all sorts of ways to survive, and they made me appreciate how much my 85-year-old attitudes have been shaped by my largely male-only background.

I grew up, was educated and worked in an almost exclusively male-centric world, both generally and professionally for my first 30 years. After six years working abroad, I returned to Sydney in 1960, set up in practice and continued until 1994.

I’ve calculated that the percentage of women employed in my office in the 1980s was a bit over 18% of the total, but not all of them (men or women) were registered, I had no women partners, and the women employed were mostly recent graduates. It was a fairly typical office of the time, and from later evidence not much has changed!

I don’t think I’ve ever had any thought-through position about gender equity. I certainly had no prejudices about employing women and took the simplistic view that we should employ the best people for the job. In this regard, gender was not considered a factor as far as design ability is concerned. My office had no systematised grades or pay scales, salaries were negotiated, and the fact that women might be deliberately paid at lesser rates than men for equal work never occurred to me. I found that women civilise an office, there’s less loud talk, and they’re smarter at resolving personal conflicts.

My practice overlapped with the emerging women’s movement, Greer’s Female Eunuch was published in 1970, and we have all been affected by the desirable societal changes that have subsequently happened. Greer saw the sexual revolution as coming first and 40 years later the second wave of the feminist movement is concerned about power, equity and work based issues.

The smart women that have coalesced around Naomi Stead and Justine Clark have called themselves Parlour. I thought the name sounded a bit old-fashioned at first, until it was explained that ‘parlour’ is derived from ‘parler’, the French verb ‘to speak’. Their website explains it as:

PARLOUR: a space to speak – bringing together research, informed opinion and resources; generating debate and discussion; expanding the spaces for women in Australian architecture.

The first thing they did was some excellent research, which is posted on their website. Based on this research, Naomi Stead has summed up the current situation for women as follows:

Women now enter architecture schools in nearly equal numbers to men, where they perform just as well and graduate in comparable numbers. In work life, women’s levels of satisfaction are mostly on a par with men’s, they generally feel respected as part of a strong community of architects and there appear to be low levels of explicit discrimination. Yet despite this positive picture, a large proportion of women in architecture experience high levels of stress and disillusionment and many have left altogether.

Overall, there is a strong perception of gender-based inequity, and the data tends to bear this out, women are under-represented by every measure of participation. There is a striking scarcity of women in senior leadership and management roles; trained women tend to leave the profession by stepping sideways into aligned disciplines or not returning from a career break.

There is evidence of gender-based pay inequity, and of the sidelining of both female and male architects working part-time, with women over-represented among those part-time workers. The ingrained long-hours culture of architectural practice impacts disproportionately on women. And while low pay, long hours and difficulty reconciling professional and family life are also problems for men in the profession, they impact on women in different and compounded ways.

Alas, the near-equal gender split in architecture school described above is not continued in the workforce. Gill Matthewson has crunched the numbers to show that women only form 21% of registered architects compared with 36% of equivalently qualified women in medicine and 46% of women in the law.

Parlour hasn’t taken a narrow view of the profession, however, and can see that the broad problems facing women complement those faced by men, that we are all in the same bind together, and while women clearly deserve equality in terms of pay and power, the long hours, no overtime/low pay culture is a problem in different ways for both sexes and, indeed, for the profession as a whole.

Now that architects are not chained to a drawing board, there is an opportunity to develop more flexible, different yet equal working arrangements for both men and women and, in particular, ones that support experienced and talented women to stay in the profession over their child-bearing years and later.

Equality in all ways is not just an abstract matter of natural justice, desirable as that may be. We need the practical involvement of all the best people of both sexes in all professions and workplaces if we are to prosper in sustainable ways and survive in an uncertain world.

I would like to think that Parlour’s endeavours will cause male architects to embrace more equitable change and start to correct the current situation, but also encourage them to join with their female colleagues in resolving the even graver survival problems facing the profession.

Parlour needs financial and moral support to bring about these desirable and evolving changes that will benefit all of us, and I strongly urge your support for them.

Come into the Parlour!

Note: This post was first published on Don Gazzard’s great blog, and we are delighted to republish it here.

Don Gazzard has practised as an architect and urban designer since 1960 and his buildings have won a number of architectural awards. He was elected a Life Fellow of the Royal Australian Institute of Architects in 1970. A prolific writer on architecture and urban affairs, he has also written several novels.

Previous postHow to flex Next postWomen Transforming the City – images