In late August, the President of the WA chapter of the Australian Institute of Architects, Suzie Hunt, felt compelled to write a letter to the WA membership about some of the disturbing stories of harassment and abuse that had been shared at a recent #WWW event on the #TimesUp movement. The stories raised will be familiar to all, resonating on a national and a global level. Suzie has given Parlour permission to reproduce her letter. 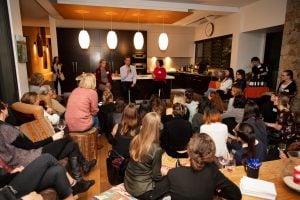 Since my election as President of the Institute, I have had the privilege to get to know so many more Western Australian architects. Architects who care passionately about the built environment, their clients, projects and staff. I have proudly advocated for the profession on a variety of important issues including procurement, Design WA, local government reform, an Institute membership re-structure, gender, diversity, inclusiveness and mental health.

Today, I am writing to you asking for your help.

For some time now, I have thought that there was a need to provide women architects with an opportunity to network, share experiences, seek guidance and discuss strategies around their careers, and reflect on ways to combine work with the joys of providing care. So, in line with the Institute’s 2018–2020 Strategic Plan and in cooperation with our Gender Equity Taskforce, I established a women’s networking group ‘Work Women Wisdom’ (#WWW).

Our inaugural event called ‘The Art of Networking’ was attended by 150 enthusiastic and engaged women ranging in ages from 21 to 71. It was the first ‘women in architecture’ event held in over 20 years, and for most of us who remembered the last one, we believed – and hoped – that the concerns we held then were no longer relevant.

Unfortunately, we were mistaken. Since that first event last year, I have had women approach me feeling devastated, disillusioned and depressed, wanting to share their stories about harassment and abuse at work, in the hope that another woman or young man will not have to experience the same. It is for this reason that our second #WWW gathering focused on #TimesUp.

The Time’s Up movement was established in January 2018 in the United States by professional women to target sexual, emotional and verbal harassment in the workplace in response to the Weinstein scandal and #MeToo. At our #TimesUp event, the attendees – nearly 100 women – heard from the Equal Opportunity Commission’s Alan McDonald and Diana MacTiernan about employees’ rights under the law, in respect of the Equal Opportunity Act and to a lesser extent the Fair Work Act. We also offered attendees an opportunity to share their experiences with a young architect, who collated their responses. Most of the women who did so were aged between 25 and 40 and found that speaking up for the first time and hearing that they were not alone was a liberating and healing experience.

The anecdotal information we collated makes for very depressing reading, with examples ranging from exclusion to sexual abuse. It should be noted that all the women spoke on the basis of anonymity and did not name their perpetrators. For the purposes of this letter I would like to relay some real (albeit generalised) examples here, to give you a sense of the type of unacceptable behaviour that has been, until now, tacitly permitted in our profession:

I know you will be shocked by these accounts. We all want members of our profession to feel safe at work, to be conscious of their own actions, and those of their peers. However, for some reading this letter, it might be hard to understand the gravity of these actions. And others may question why the women affected didn’t just speak up? But there are many reasons women have traditionally stayed silent such as:

For all these reasons, we as a profession need to look out for unacceptable behaviour in our workplace. I urge you – if you witness this type of behaviour – to call it out, loudly, offer guidance (and, if warranted, disciplinary action) to the perpetrator and support to the targeted person. It’s no longer good enough to turn a blind eye, or give a reassuring look and shrug and then forget about it. It’s not acceptable to chat quietly to the victim in the kitchen and advise them how they might want to consider changing their behaviour to stop the unacceptable behaviour of others. This type of pressure and bullying can have a significant effect on someone’s mental health and career trajectory.

Thanks to the research undertaken by Parlour, we know that women are leaving the profession in their 30s and 40s in significant numbers. It’s true that some of that attrition may be related to having children, caring for elderly parents and the general demands of family life – which can be incompatible with some forms of practice – but we believe that a good percentage of that documented attrition is the result of poor workplace cultures and practices. These can prevent women from reaching their full potential and from actively engaging or returning to the workforce after they have had their children.

It’s no longer good enough to turn a blind eye, or give a reassuring look and shrug and then forget about it.

Let’s be clear: balancing caring and working roles are issues for both women and men now, more so than in previous generations. So, it is important that architectural practices support both women and men to have fulfilling personal lives and professional careers, through good work behaviours.

I strongly urge all practices to consider checking (and improving) their systems and processes, and providing training for management and directors, about receiving, addressing and resolving internal complaints. It is imperative that all staff are inducted and are aware of the policies. The Parlour Guides to Equitable Practice are an excellent resource for this type of cultural shift.

Other resources that you may find useful include:

In closing, while this letter directly relates to the experiences of women in our profession who attended the #TimesUp #WWW event, I am positive that unacceptable workplace behaviours affect others in our offices, including male architects. Any form of workplace bullying, harassment, abuse, exclusion, intimidation or discrimination, whether it’s based on gender or directed at a minority group, is totally unacceptable.

As a profession we need to have zero tolerance for this type of behaviour. I want the architecture profession to be one of fairness and inclusiveness; a community that embraces and celebrates diversity; and offers a career that is fulfilling, sustainable and long-lasting.

I would sincerely appreciate it if you could distribute this letter as you see fit and discuss its contents with your work colleagues. Please feel free to contact me directly if you would like to discuss the issues further.

Thank you for your time.

Suzanne (Suzie) Hunt is the current President of the WA chapter of the Australian Institute of Architects, and the first woman to take on the role. Suzie established the award-winning architectural and interior design practice Suzanne Hunt Architect in 2004, and has more than 30 years of working in WA and the UK in all sectors. She is chair of the Peter Hunt Travel Prize, and sits on the Curtin Architecture Advisory Board and the Rottnest Island Authority Board.  In addition to her role as a presenter on Channel 10’s Australia By Design, Suzie is an engaging public speaker on architecture, championing gender equity, diversity and sustainable work practices to local community groups, school and tertiary students. As a single mother of four of the “sandwich generation”, Suzie is well aware of the challenges of juggling caring roles with personal and professional demands.