The commonalities with architecture are obvious. Despite high numbers in the profession, many women graphic designers remain alarmingly invisible. Designer and Lecturer in Communication Design Jane Connory outlines her research on the invisibility of women in Australian graphic design and the work needed to achieve more equitable outcomes. 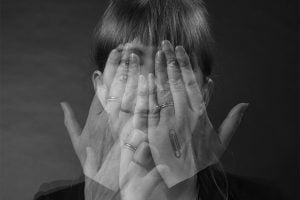 I landed my first job as a junior art director straight out of university in the mid-1990s. My parents were as proud as punch and so was I. The atmosphere was extremely heady and exciting for a sheltered girl from Melbourne’s western suburbs. Deadlines were tight, lunches were long, and I was being paid to be creative. For a short naive moment, I thought I had made it – but it did not take long for the reality to sink in.

I began my career only three years out of high school with the expectation that my degree and polished portfolio would take me places. Yet it was the junior boys who were taken under the wing of the senior directors. They got all the benefits of the boy’s club and their careers took off, while I struggled to find women in creative positions of leadership to help me do the same.

For more than two decades my career progressed though jobs as a graphic designer in publishing, branding and illustration. Then I had children and shifted my focus to be an educator and researcher. It was there that I realised my students were still not being exposed to the achievements of women in graphic design. This lack of visibility of women who had made significant contributions to the industry put students at a disadvantage. It demonstrated that gendered inequity has not improved in decades.

This invisibility devalues women’s contributions and stifles self-efficacy among each student cohort. I knew women were present, as my network had grown to connect with many, but their achievements seemed invisible in the educational environment. It was this moment of realisation that led to my PhD, The View from Here, a research project that explored this invisibility and advocated for women’s equity and autonomy in the graphic design industry.

Counting to make it count

Demonstrating that women were invisible in Australian graphic design required more than just a hunch. Yet when I went looking for the data that measured it, it was not there. So, I went directly to the source and surveyed the industry to see who could name women who had made a significant contribution to Australian graphic design since 1960. Nearly 150 women were mentioned, but people on average could only name 1.62 women. The evidence began to mount. 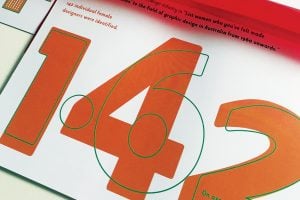 I then examined the pipeline of female graduates pouring out of Monash University since 1970. Here I found that women were constantly in the majority and their numbers were increasing. By 2010, 71% of these graduates were women – a percentage that is mirrored across Australia’s higher education as well as in the US and UK. 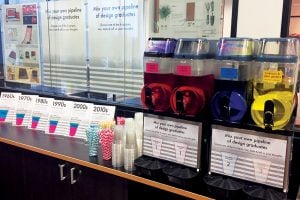 The Slushy Installation was an interactive visualisation of the data demonstrating the pipeline of women graduating from graphic design qualifications from Monash University. Photo: Arun (Ernesto) Munoz. 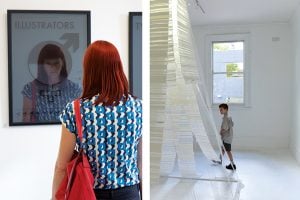 Establishing data sets that demonstrated the invisibility of women in Australian graphic design was interesting, but it did not reveal the reasons for the phenomenon, which are complex and layered. They are a bi-product of the patriarchal powers in play, but are also a result of women preferring to simply stay out of the limelight.

As a design discipline, graphic design has other non-gendered issues that mean graphic designers are often invisible. The industry has been known as different things since the 1900s, including Applied Art, Commercial Art and Visual Communication. This confusion, along with the rapid evolution of a graphic designer’s role, has caused much of this invisibility. Technology has been a major influencer of this change. The Mac and design thinking have influenced a shift from graphic design being an aesthetic practice to one with a social conscience.

Ultimately, graphic design communicates something about or for a client or their audience. It is that message or function that is designed to be visible – not the designer. Many graphic designers prefer this anonymity regardless of their gender. However, the platforms that graphic designers can use to promote themselves are often skewed towards promoting men. As previously mentioned, award and Hall of Fame platforms demonstrate many unconscious biases at play.

When I interviewed women in Australian graphic design who had both judged and been awarded these accolades, the potential for change emerged. I developed a framework of gender equitable juries, which validated and connected jurors, and focused on clients, clear criteria and blind evaluations to begin creating equities on these platforms. 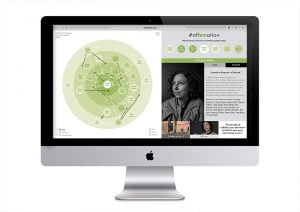 The #afFEMation.com website, designed by Jane Connory, increases the representation of women in Australian graphic design.

The way history is written and taught in higher education also systematically makes women invisible. The #afFEMation website was my contribution towards making heroes of women in Australian graphic design. This site features biographies, portraits, videoed interviews, galleries of work and inspirational quotes. It also visualises the social, professional and educational networks between these women in an interactive sociogram. Each profile can be shared directly to social media.

Unpacking the design process I used to create this site also resulted in a framework to improve gender equity in design histories. This framework consisted of systematic and consistent privilege checking, measured gender equity, validation of inclusion through triangulation, the rejection of referencing women only in relationship to men, and prioritising current authorship.

During this analysis, I was cognisant of art directing the portraits to portray the women in a heroic light. I used heroic tropes of a raised chin and upward gaze – something common in male portraiture. Think of Barack Obama’s Hope poster campaign, Che Guevara’s iconic portrait, and even Superman’s power stance. The public is often uncomfortable with images of women showing power and strength. Only recently Australian Rules footballer Taylor Harris was violently trolled after an image of her mid-flight and fully extended, kicking a footy, was published online. Her visual force as an WAFL hero created an immediate backlash; however, this was reversed as a more empathetic audience applauded her efforts and career. This moment in time is now immortalised as a bronze sculpture positioned in central Melbourne. It acts as a reminder of the strength and abilities of women. 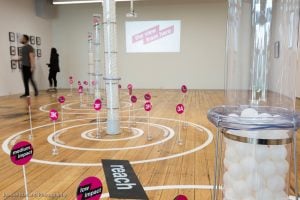 The View from Here exhibition sought to visualise the reach, impact and exposure of research by Jane Connory. Multiple projects lined the gallery walls and were each represented in a data visualisation. Photo: Joanne Manariti.

The View from Here was submitted as both an exegesis and an exhibition. The exhibition sought to visualise the exposure, impact and reach of all the advocacy work I had done during the research project. I could measure over 58,935 sightings of the work and showed them as a life-sized bar graph filled with ping pong balls. 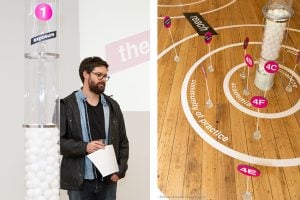 The reach and impacts of projects in The View from Here were shown as concentric circles and pink circles shown at different heights. Photo: Joanne Manariti.

The show also demonstrated that my work had reached beyond academia and the graphic design community of practice to be mostly present in the wider social sphere – something that is not actively encouraged in most PhDs but should be considered as a viable metric. One of the projects with the most impact was an online article in The Conversation titled “Hidden Women of History: Ruby Lindsay, one of Australia’s First Female Graphic Designers”.

This was the most read article on The Conversation in the week that it appeared. Within four months of it being published, this article had been read 8,056 times, received 14 comments, was shared on Facebook 1,800 times, and was shared on Twitter 80 times. The popularity of this article demonstrated that the implementation of my Gender Equitable Histories framework did not affect the readability and cohesiveness of the narratives it generates. On the contrary, it suggests that referencing historical women on their own merits, and not solely in relationship to their husbands or families, is something that piques the interest of online readers. 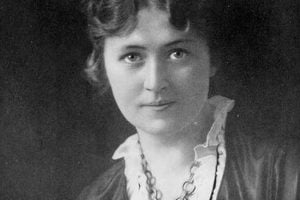 Ruby Lindsay was one of Australia’s first female graphic designers in the early 1900s.

I entered this research project with a clear hypothesis that women were indeed invisible as graphic designers in Australia. I found this to be true, but uncovered many reasons for this. I worked hard to demonstrate how structures of power that enforce this invisibility can be rethought to create more equitable outcomes. However, I was also careful to respect the autonomy of women who chose to embrace the anonymous nature of graphic design. For every extraordinary woman I interviewed on this journey, there are thousands more who generate impactful work that we will never know.

Jane Connory recently passed her PhD at Monash University, Art, Design and Architecture, which worked towards a gender-inclusive history of Australian graphic design. She was awarded a Master of Communication Design (Design Management) with Distinction from RMIT in 2016 and has been a practising designer in the advertising, branding and publishing sectors, in both London and Melbourne, since 1997. She has also lectured in and managed communication design programs in both the VET and Higher Education sectors since 2005. Alongside her research exploring the visibility of women in design, she is currently a Lecturer in Communication Design at Swinburne University, an Executive Board member of the Creative Women’s Circle and an Editorial Board member of the Exchanges Journal.

Published papers from Jane’s PhD, A View from Here, can be found here.

Previous postAiming high Next postThe pay gap: what can you do about it?