The findings of the first major survey of work-related wellbeing in Australian architecture have now been released. The results are sobering and point to the need for urgent action.

Watch Naomi Stead’s  presentation on the survey, read an overview of key findings and download the full report.

The Wellbeing of Architects Practitioner Survey is the largest ever scholarly survey to investigate work-related wellbeing in architecture. Conducted as part of the Architectural Cultures: Professional Identity, Education and Wellbeing research study in 2021, it was completed by 2,066 respondents.

The findings reveal that the profession is facing serious challenges. Respondents report surprisingly low personal wellbeing scores, elevated levels of psychological distress and higher-than-average levels of burnout. Most worryingly, respondents report substantially lower levels of subjective quality of life than Australia’s national norms on all measures. The researchers point to the urgent need to examine the drivers of this phenomenon and to work towards improving the levels of wellbeing in the Australian architecture community.

The survey findings indicate that contributing factors are structural, not individual. That is, poor wellbeing is the result of systemic challenges within the profession – inadequate time and low fees, unsatisfactory procurement processes and the undervaluing of architectural work – and not of individual characteristics, such as perfectionism.

These systemic issues have previously been identified as contributing to the exaggerated attrition of women from architectural practice, and have long been understood to detrimentally impact the quality and cost of built outcomes – including overall construction costs and timeframes, lifecycle costs, the quality of built outcomes and therefore the wider contribution projects can make to communities and the public realm.

Now, this important research demonstrates the impact of these same factors on mental wellbeing, and measures the costs borne by a large proportion of individuals within the profession. Addressing these challenges requires collective action to improve the context within which architects practice, and thereby the contribution they are able to make.

There is a great potential for architects to be drivers for wellbeing within the construction industry, but first we need to change the culture within practices.”

The survey report includes positive findings in terms of professional identity and support. Many respondents have a strong sense of career agency, feel well supported in their careers by family and friends, and have a sense of their own autonomy and competence at work. Most take pride in their work. They strongly identify with their profession, and are committed to the industry. Nonetheless, despite this commitment, respondents report little optimism about the future of the profession.

Time, rather than identity, emerges as a significant factor. Work-related factors seen by respondents as having negative effects on wellbeing were concentrated around time – the time available to do work, the need to work overtime in order to complete it and the timelines and deadlines imposed externally from the industry.

Increase fees – time pressure would be taken off staff, business financial pressures would reduce, better work can be done as there is more time to do it, less mistakes as projects are not as rushed, less mistakes means less client complaints or risk of being sued, students and graduates can be trained properly, employees can have a better work/life balance as they are not always in the office, you get paid for the work that you do and not keep doing work for free. Architects would be more valued and not seen as the draftie.”

The overall scores for anxiety and depression are higher than typically seen in other studies, although they don’t meet the threshold for significant anxiety or depression. Respondents reported higher levels of anxiety than depression.

Many respondents were committed to their profession and took pride in their work, but said they would not necessarily recommend a career in architecture to others.

Better personal wellbeing was most strongly associated with higher levels of career satisfaction, career support, relatedness to others, career optimism and career balance.

Those who have high personal wellbeing are also likely to have high career satisfaction, and vice versa. The strongest negative correlation showed that poor career balance was associated with exhaustion.

Lower levels of satisfaction with remuneration were associated with poor wellbeing.

Satisfaction with remuneration was split – 39% were satisfied with their current level of remuneration, while 43% were dissatisfied. Satisfaction increased with age, with those under 36 years old expressing the most dissatisfaction. Those employed in more senior positions were generally more satisfied, as were those in administrative or business support positions.

Respondents working in private practice were more likely to be dissatisfied with current remuneration compared with those in universities and not-for-profit organisations.

Respondents working in allied fields, such as urban design, construction, and heritage and conservation, reported greater satisfaction with remuneration compared with those working in architecture or interiors.

Compressed timelines, unrealistic deadlines, and inadequate resourcing of projects (including inadequate fees) are all associated with poorer wellbeing.

The top three industry-related factors with a negative impact on wellbeing were timelines or deadlines (55%), fees (40%) and contractual arrangements (26%). The ‘changing role and agency of architects’, ‘builder relationships’, and ‘client relationships’ also rated.

A substantial percentage of respondents reported working more hours than they were contracted to work, on a regular (weekly or daily) basis.

More than one-third of respondents said their actual working hours exceeded 45 hours per week, and nearly 10% said they worked more than 55 hours weekly.

The career stages perceived as having a negative impact on wellbeing included periods spent looking for work (73%), the process of becoming registered as an architect (41%) and becoming a parent / having caring responsibilities (40%).

The survey reveals a ‘healthy perfectionism’ among respondents. Negative effects on work-related wellbeing in architecture cannot be solely or even largely attributed to perfectionism.

The impact of COVID

The impact of COVID-19 was mixed: respondents’ assessment of their quality of life in 2021 compared with before the pandemic was split closely between those whose wellbeing had worsened (38%), was unchanged (35%) and had improved (27%).

Respondents who reported a significant decrease in quality of life since COVID-19 recorded a mean personal wellbeing score of 49.8. This is well below the 2020 national average of 76.5.

The survey had a very strong response rate – 2,066 individuals – making it the largest survey of its kind ever conducted internationally. Women represent over half the respondents (56%) and mid-career professionals are strongly represented, with 61% of participants aged between 26 and 45. Over half (55%) the respondents had worked in the profession for more than 10 years and almost two-thirds (63%) were registered architects.

Women are over-represented in the sample, but otherwise it broadly correlates with the current demographics of Australian architectural population across age, state of residence and country of birth.

Over one-third of respondents had taken a career break, most commonly for parental leave or travel, and to a lesser extent for mental wellbeing. This is clearly gendered. Women were more likely to take a career break for parental leave, caring responsibilities or mental wellbeing, while men were more likely to take a career break to accommodate life transitions – such as time off between jobs, moving house, or migration (as recorded in the ‘other’ category). It is important to note that the survey methodology means that the findings only represent the experiences of the respondents – they cannot be extrapolated to make population-wide assumption. Nevertheless the sample is large and the conclusions are important.

The findings of this survey will be correlated with further work underway by the research team. This includes a survey of architecture students, which focuses on work cultures and wellbeing in education, a series of in-depth focus groups, and a range of industry forums and events. All will contribute to the ultimate goal of the project – the development of tailored resources to support architecture-based workplaces, professional organisations and education providers to work towards improving occupational wellbeing through cultural change.

Undertaken in 2021, the nation-wide survey attracted a large number of respondents and sought both qualitative and quantitative data. It uses validated multi-item measures that enable direct comparison between architecture and other professions and populations. This approach is rarely used in research on the architecture profession, and is particularly significant when investigating subjective wellbeing. It was undertaken during a moment of great disruption and records the effects of ongoing global upheaval caused by the COVID-19 pandemic. For further detail on survey methodology see the full report.

The survey is part of a comprehensive three-year study funded by the Australian Research Council. ‘Architectural Cultures: Professional identity, education and wellbeing’ investigates the widely held perception of problems with work-related wellbeing among students and practitioners. It is the first large-scale, rigorous primary research project to examine how workplace cultures and professional identity affect wellbeing in Australian architecture – and thus lay the foundations for practical improvements in the future.

The project is an interdisciplinary collaboration between researchers at RMIT’s Design and Creative Practice Enabling Capability Platform and Monash University’s Department of Architecture (Faculty of Art, Design and Architecture) and Department of Management (Faculty of Business and Economics). It also includes many industry-based research partners including five architectural offices, the New South Wales Architects Registration Board, the Australian Institute of Architects, and Association of Consulting Architects (ACA) and the Association of Australasian Schools of Architecture (AASA).

Other components include a survey of students and academics, pilot interviews and focus groups. For further detail see the Wellbeing of Architects website. 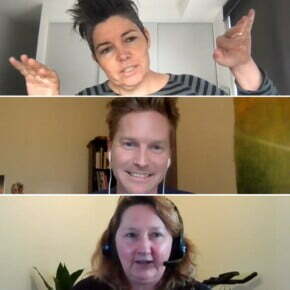 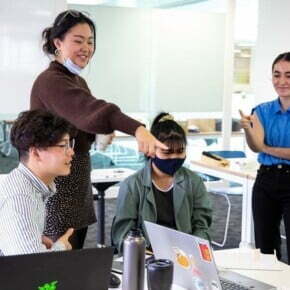 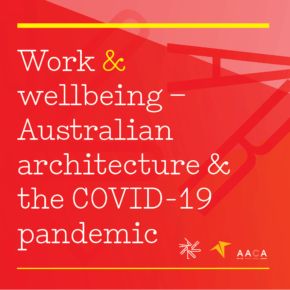