The need for risk-taking

Being experimental, taking risks and potentially failing in a neo-liberal environment of teaching and research metrics is somewhat difficult but a necessary challenge that we face in education today, says SueAnne Ware.

Why did you choose landscape architecture? What attracted you to the discipline, and what do you enjoy most about it now?

I found landscape architecture in a fairly circuitous manner. In my first year of university I was studying sculpture because I like to weld and make things when we went on a field trip to the Saarinen’s Miller House in Columbus, Indiana. We had to do a sketchbook exercise where we did 100 charcoal sketches in one hour. Most of my peers sketched the art collection or the architecture, but I had only drawn the garden, which was designed by Dan Kiley. So, my tutors said that I might want to look into landscape architecture. I was pretty hooked on modernist landscape architects from then on and that summer I visited every Garrett Eckbo, Thomas Church, Dan Kiley and Lawrence Halprin project that was on a Greyhound bus route. Initially I was attracted to the structure of the garden rooms and the ways in which landscape did not have to be picturesque or organic, but over time I just came to love the fact that it is fairly unpredictable, as are users of public space. There is something fairly intriguing for me to design with a medium that defies control. Nearly three decades later, I still enjoy landscape’s temporal (and temperal – sic) nature as well as working in the public realm where you are beholden to something bigger than your own agendas.

What do you do? How does this differ from what you imagined doing when you set out to study landscape architecture?

Firstly, I never was a terrific student. I failed a lot of courses, was very passionate about other things (mainly sport), but when I liked something, I worked very hard at it. When I graduated from undergrad, I worked for a very good practice in Los Angeles and then formed my own practice with two business partners. 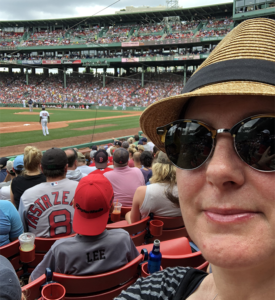 But then the Rodney King riots happened, and I imagined myself starting a nonprofit and changing the built environments of public housing estates as well as dodgy neighbourhoods. I went to graduate school at Berkeley with that in mind but then I met and worked for one of my first mentors Walter Hood. He was probably the first person in the academy who recognised my background as an asset and he knew I was pretty fearless. I sat in fairly dodgy parks in Oakland, California doing post occupancy evaluations and sketches for Walt while I worked for him. Walter got me my first academic job at a historically black (African American) university in North Carolina where he went to undergrad. So, I joined the academy to explore the kind of practice I wanted to make, which is generally around design activism and political agency. I became a Head of School relatively recently, because I felt the need to challenge academic complacency from the inside but also because I am keenly aware of just how big the gap is becoming between higher education and the lives of disadvantaged and marginalised communities.

What have been the biggest career challenges and successes so far?

Most recently, I’d say leading a major restructure / organisational change in the School of Architecture and Built Environment. What I am most proud of in this very difficult situation is achieving gender parity and gaining greater diversity across the academic and professional staff teams in my School. We look and feel very different to when I arrived. I cannot even begin to describe the personal and professional challenges that were and are part and parcel of this type of change… but like landscape, it is process, and things emerge over space as well as time. It’s early days to describe the successes but I believe I could run a workshop in “things that were unsuccessful and human behaviours in light of the need for deep reform”. I would also add a small but significant section to this workshop regarding weasel words and the ways to endure never-ending personal and political assaults on your reputation.

In terms of my creative practice, one of the biggest challenges and successes that I have had to date includes working with very diverse and marginalised groups of people. I don’t necessarily see the projects as the successes. They are just the physical manifestations of working in and with various communities. I prefer to think about the processes and the series of deeply enchained relationships that have occurred over the time that these projects unfolded as the successes. So, while many might say my successes are the Anti-Memorial to Heroin Overdose Victims or the SIEVX Memorial, I’d say it was the teams of people I’ve collaborated with on these projects and the commitment of affected communities in holding me to account for their collective and individual voices and agency.

What is your leadership style? What experiences have shaped this?

In my mind’s eye I think that my leadership style is defined by empowering others through distributed leadership and putting together teams of leaders rather than one person… I’ve never been a big fan of the “there can be only one” (bad pun on Highlander) or what others might call top down approaches, although the academy often demands this from its leaders. My School Executive has thirteen members, which is about one-third of the full school total staff count of thirty-three people. I don’t buy into the artificial boundaries between HEW staff or Professional Staff and Academic Staff; we are one team whose job it is to make the School and University a better place to work and study within. That said, if someone wants to take a big risk that I think is worth a go, and it does not pan out, I see my role as taking the responsibility for that person.

I tend to focus on the big picture and what I can do to help everyone remain inspired. I am not great at structured leadership and prefer a bit of chaos over everything being nicely in place.

I have a few cultural challenges in that I am very direct and forthright, and tend to be critical. This is not always welcomed or seen as constructive and, sadly, for a woman in leadership, I find that this quality is not appreciated in the same way I’ve observed that it is with my male counterparts.

What changes – structural and tactical – are needed to increase equity in the profession and discipline?

Interestingly, Parlour and other terrific professional body committee groups have been able to identify and challenge many of the structural and prolific barriers that exist in the built environment professions and our disciplines. I love the on-the-ground activities like the Parlour Salons or the Women in Wikipedia Hackathons in addition to the outstanding Equity Policy that your team has developed. My fear is that we may be “preaching to the converted” and by this I mean that women, those who don’t gender identify, men as well as LGBITQ communities who have taken equity pledges, generally understand and want to shift the underlying culture and systemic barriers in our disciplines and professions.

But we are not in the majority, nor in my experience are we actually being heard. And while I’ve discussed my issues with being direct and somewhat confrontational, this has not produced the desired effect of real change in the challenges with those who largely remain in power. So, I’d say that those who can infiltrate hegemonic cultures and eloquently provide an evidence base for change as well as tapping into the empathy of fellow human beings, are needed for tactical and long-term cultural changes. I see myself as more of a Lily Allen approach to these environs… if this is too subtle a reference, see also her 2009 album ‘It’s not me, it’s you’. It’s the first track!

One of the reasons I admire the University of Newcastle (UON) is that one of our core values is Excellence for Equity. As a regional university, roughly 60% of our students are from low socio-economic backgrounds. They work full time, are mature aged, were raised by single parents, have survived domestic violence, are from very diverse ethnic backgrounds, often the first in their families to go to university, and 20% identify as Aboriginal or Torres Strait Islander peoples.

We have the honour to teach, learn from, collaborate with, and engage students who define equity and diversity.

A significant problem that I faced being from more than one of the categories listed above is that I learn differently to how I was largely taught. I only discovered this when I became an educator. So, shaping pedagogies and approaches to teaching for differing modes of learning is a huge issue at UON. Being experimental, taking risks, and potentially failing in a neo-liberal environment of teaching and research metrics is counter intuitive and somewhat difficult but a necessary challenge that we face in education today. UON supports innovation in teaching and experimental approaches through offering a suite of incentives to try novel approaches, teaching awards, and a range of teaching circles to discuss challenges and possible approaches. This does not resolve everything and often when staff do an unconscious bias test or they experience deep peer review of their teaching methods, there is a time of critical reflection and incremental change to transform their practice. All of this involves an investment of time, passion and commitment, which can be seen as being in conflict with research priorities.

What advice would you give a young woman embarking on a career in architectural academia or practice today?

Whether it be moxie, true grit, resilience, force of character and determination, I’d ask that they learn to believe in themselves, despite our professions and these challenges. A number of people, including close mentors and family members, all warned me about the difficulties I would face in my chosen profession, which to a large degree have all transpired across my career – but the warnings were not all that useful. What assisted me was the empathy, compassion and generosity of a number of people who showed me how to believe in myself.

I’d also ask that they/she try and embrace failure or learn to take rigorous risks. Too often we hold ourselves back for fear of failure. Perhaps the one thing that I know for sure (mis-quoting a fairly famous African American woman) is that failing big is far more fulfilling than playing it safe.

Professor SueAnne Ware is a landscape architect, researcher and author. Originally from the USA, she moved to Australia to work with Indigenous communities, and eventually became an academic. She is currently the Head of School of Architecture and Built Environment at the University of Newcastle in New South Wales. SueAnne’s research and practice are embedded in the belief that good design should not be tied to wealth. People of all financial backgrounds are deserving of quality design. Social justice and activism, and the idea that public spaces represent freedom and equality, are major motivations behind her work.