PARLOUR: a space to speak – bringing together research, informed opinion and resources; generating debate and discussion; expanding the spaces for women in Australian architecture.
Career paths

When Susan Dugdale arrived in Alice Springs in the mid-1990s, little did she know that she would make the regional city her permanent home and place of work. Here NCGE committee member Jessica Hardwick profiles Susan Dugdale, our latest in the Women in Architecture series. 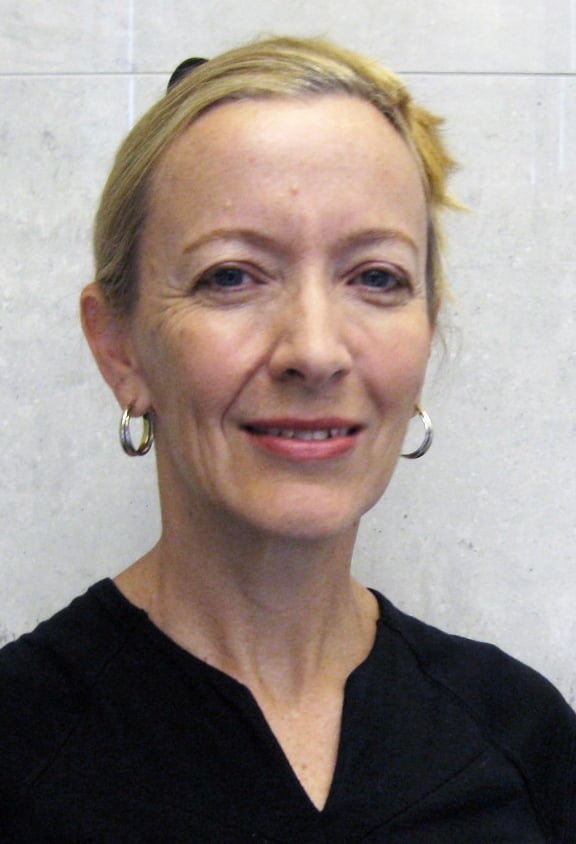 Since arriving in Alice Springs some 22 years ago ‘for two months work’, Susan Dugdale has produced a body of work whose influence is notable in the fabric of Alice Springs and beyond. Susan is Director of Alice Springs practice, Susan Dugdale & Associates, and a current Institute National Councillor. She is a highly regarded leader both within the Northern Territory and at a national level, having also contributed at a board level to the Olive Pink Botanic Garden and served as a Council Member on the Northern Territory Heritage Advisory Council.

Originally from Brisbane, Dugdale completed four years of her architectural education at the University of Queensland, completing her final year of studies at RMIT. After practising for 10 years in Melbourne and ready for something new, she accepted an opportunity to assist with a short-term workload at Alice Springs’ Indigenous-owned firm, Tangentyere Design, where she worked until 2000 when she founded her own practice.

‘What I enjoy most about the practice of architecture is the diversity of activities and the range of skills you have to bring to it. A lot of it’s about people, but then you’ve got to have good technical skills, plus experience of how buildings go together and how the whole industry works, materials and their value, their detailing, the ease of use in local industry. It makes me feel like I am quite a broad person to be an architect.’

On the drive into Alice for our interview, several of Susan’s built works were easily identifiable – even in passing. Susan Dugdale and Associates’ practice profile states that ‘Director Sue Dugdale has a personal passion for discovering and developing a unique regional identity based on the particular culture, climate and geography of Central Australia. The practice evolves this broader project with each commission undertaken, by embedding stories in design, manipulation of water and light, landscape design and creating a particular sense of place, and through design of form, and selection of materials and colour.’ This continuum of thought and the cultural project that underpins the work is evident in the buildings, which contribute an atmosphere of community, optimism and excitement to the public realm.

Reflecting on what it is that has captured her interest and caused her to build a life in Alice, Susan shares, ‘It’s just really interesting living in a small community. In cities, there are generally too many people around you, so you have to edit people to select your friends and associates. Inevitably, a lot of the time you’ll go for people like you, so when I lived in Brisbane and Melbourne almost all of my friends were architects – whereas here, almost none of my friends are architects. You just have a wider community and you connect differently… When I first came to town and walked down the mall, you hear all these different languages around you, like Japanese, French, Italian, at the same time as hearing indigenous languages, which are from here, it’s very eye-opening.’ With perfect timing, right in the middle of discussing this point, an artist friend walks by and briefly interrupts our interview for a quick ‘hello’. Picking up where we left off, Sue shares, ‘In a small town of only 30,000 people there are four or five local architectural practices, which is higher than you’d expect.’ In recent years Sue has observed a new breed of construction company and developer emerging in the Northern Territory and notes that these younger companies ‘really value design’. According to Dugdale, ‘There are good opportunities to work closely and engage with local craftsmen, materials suppliers and artists on an ongoing basis, which informs the building process and increases knowledge – and it’s not adversarial, which is a fantastic thing.’

Of the practice’s recently completed Alice Springs ‘CBD Revitalisation’ project, Sue reflected, ‘It was a chance to express the identity of the community at a larger scale. In particular, Alice Springs is a creative hub and has a really high-level arts community – particularly visual arts and painting, with internationally regarded indigenous and non-indigenous artists, as well as musicians and performance artists. [Prior to the commissioning of this work] you could walk down the mall and not know it, except for a few tourist shops… I think architecture is urban design as well. We need to tell ourselves who we are through what we look like to visitors.’ 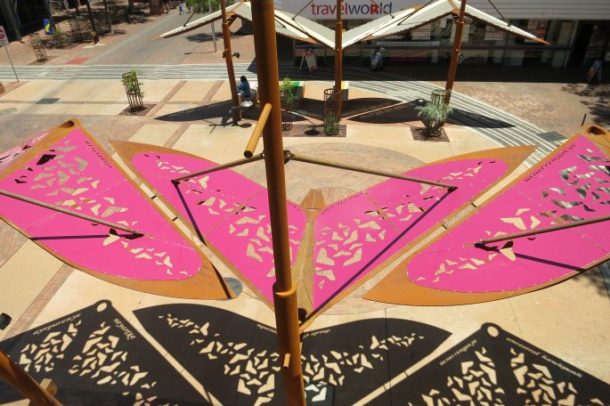 This project was about expression of community identity and inclusion, with an indigenous cultural framework being specifically commissioned, to underpin a lot of the design work. Four artworks were commissioned as part of the project, produced in collaboration with local artists and makers. The project connected with a lot of people and stakeholders from the town and Sue recalled this as being at the core of why she found the project most satisfying. 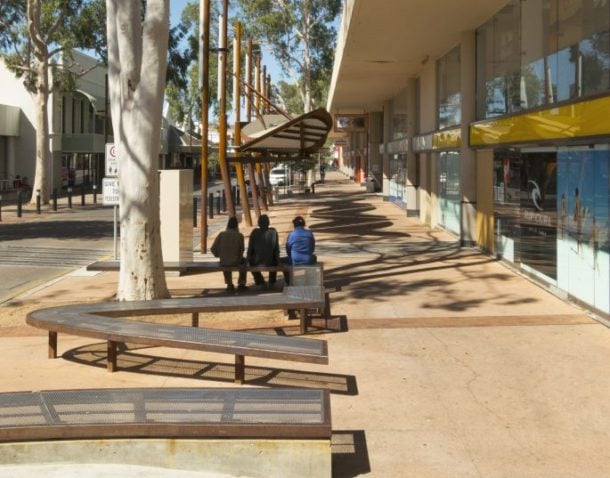 In honour of the role this project has played to the town of Alice Springs, the project was widely recognised in the Institute’s 2015 Awards program, receiving the 2015 Tracy Memorial Award (best across all categories), COLORBOND® Award for Steel Architecture and George Goyder Award for Urban Design at the Northern Territory Architecture Awards.

At this point in her career, Susan Dugdale is an active advocate for regional practitioners and women in architecture, saying that while it is currently male-dominated, ‘The men on the National Council are unbelievably proactive about gender issues, which is incredibly encouraging.’ When asked to discuss her biggest challenge as a female in architecture, Sue spoke of the ‘unintentional sexism’ and an ongoing sense of feeling marginalised that she experienced, particularly early on in her career, saying that ‘confidence’ has been her key challenge. ‘On some levels, I’ve always been a confident person and on others definitely not.’ Reflecting on the apparent confidence with which her young male colleagues seemingly leapt into practice, Sue recalled her first NT architecture award, a backyard granny flat project she entered after being encouraged by colleague Deb Fisher.

‘I’d always been kind of anti-establishment… just sort of putting myself on the fringe really, so I entered the awards and it won an award. I couldn’t believe what that meant, the affirmation from peers. I’ve totally changed my view, that I shouldn’t marginalise myself, I should be front and centre – that’s partly why I stood for National Council and got elected. I’m finding it really interesting. You get to network, be stimulated by your peers. If you let yourself be marginalised, you just miss out on so much. Jump into the middle of the pond, I reckon! Starting my own practice was a really good thing to do. I was never going to feel like I was really doing my own thing until then… But then, men and women architects probably all feel that.’

As the sole director of her practice, Sue has intentionally maintained a small team, placing high importance on continuity of authorship and close collaboration. ‘I always thought that I would [start my own practice] … I wanted to get creative opportunities for myself and to run them myself. I work collaboratively with my employees on design but I always tell my employees so they don’t have any false expectations, that I started the practice so that I have the creative opportunities… I’m not going to hand out really plum projects and walk away from them. I like working collaboratively and if you end up with a good design working relationship, that’s even better. There’s enough work in running a practice, that I feel that’s my reward.’

There’s no ‘typical day’ in Sue’s office, which she says is part of the appeal of small practice. If there’s anything typical, it’s that a day for Sue will generally start and finish on time. Sue shared, ‘I feel strongly about that – unpaid extra time is exploitative. And also … I like my life outside of work as well and I want to enjoy it… I probably could have pushed harder and got more ‘fame’ or exposure if I wanted to spend that extra 10 hours a week for my whole life, but I didn’t. I never have, and I don’t expect or want my employees to… Time away from work brings a quality to the work. It brings the real engagement with the community back to the work. It’s not subtracting but contributing to the work.’

As the practice continues to evolve, Sue looks forward to continuing to explore and give form to the cultural narrative of Central Australia. The practice, and Sue herself, is deeply embedded within the community and so she looks forward to continuing to engage on significant urban-scale projects through which the regional identity of the place can be expressed. The work of the practice is quite clearly a testament to Sue’s personal commitment to the place, as well as a product of the diverse network of relationships she has cultivated over the years – the artists, fellow architects, community leaders and makers.

‘As you develop as an architect and get more experience, you develop in your creative and critical faculties, as a synthesis. As you get more experienced, you understand your ideas that have more value or potential to be productive ideas, or not. So you can be much more efficient in knowing and trusting your own gut and instincts… It’s about the ideas, they’ve got to be the right ones for the project.’

Circling back to confidence in practice, our discussion closed with a comment from Sue regarding her practice’s recent inclusion in the Venice Biennale, which she said was a ‘very affirming experience’, noting that ‘women often don’t expect to be affirmed’. She encouraged other women architects to actively look for these opportunities to participate.

Jessica Hardwick is a member of the Australian Institute of Architects National Committee for Gender Equity. She is lead architect for Happy Haus and also has her own home-based studio based in Brisbane. Jessica is passionate about the role of architecture in building communities and social infrastructure and works primarily in the residential and community sectors.