Two recent perspectives on gender equity at work and in the home provided much food for thought. Gill Matthewson addresses the issues. 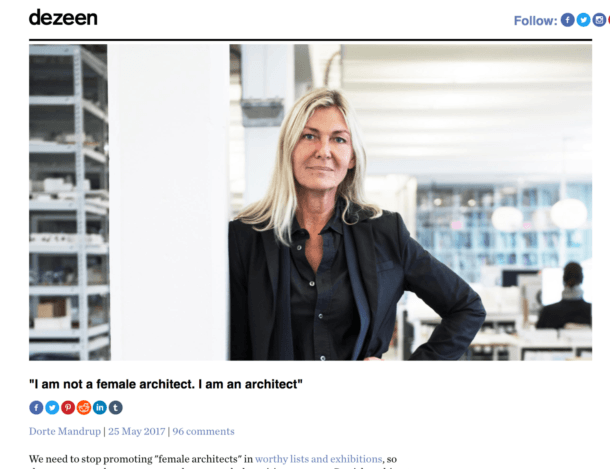 Two stories have dominated my news feeds recently (apart from the latest Trumpery). One was the piece by Danish architect Dorte Mandrup in dezeen, asking that she not be considered a female architect, but an architect. The other was a feminist comic about the gender wars of household chores.

Mandrup argues that any emphasis on her being female is a step in the wrong direction. She asks ‘for the professional courtesy of being considered an architect, without a pre-fixed set of values or attributes’. Fair enough. She goes on to declare that female architect lists, prizes and exhibitions simply do not ‘buy atonement for forgetting about women for the remainder of the year’. No, they do not. She concludes: ‘Are we not long overdue a mind shift allowing men and women to work – and compete – within the same parameters?’ Yes, we are. Long, long, long overdue. 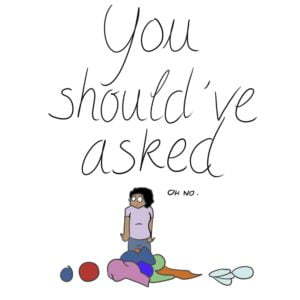 That brings me to the second story, the cartoon by the French comic artist Emma, ‘You should’ve asked’, which unpacks the day-to-day gender wars in household chores. The default position in many households is that the management of housework is what women do, hence the male cry of ‘you should’ve asked if you needed help’. The comic highlights the inherent inequity involved in this cry, since management takes up a lot of time. And it seems to have struck a chord with a lot of people around the world – it stayed on The Guardian’s ‘most viewed’ for quite a while. I saw it and thought, this is a really good presentation of an issue that I was first made aware of at least thirty years ago. That it resonates with so many today is a testament to the fixity of gender roles.

It is also a testament to the fixity of the mindset that Mandrup believes has needed to change for a very long time. I too want it to change, but that won’t happen if we pretend or hope that it doesn’t exist. Do women-only lists and prizes backfire on the project to increase gender equity? I can see why Mandrup and others might think so. Mandrup argues that it ends up reinforcing women as second-class citizens who can only ‘make it’ if there’s a special grouping. But to even think you are consequently framed as second-class means that you accept that premise. If notability comes from being the best in a category, it is not because that category is in any way inferior, but because it is sorely undervalued in a world that seriously (but almost invisibly) overvalues the dominant ones.

We worry that emphasis on being ‘female’ means people will think we only got where we are because of someone trying to balance the numbers and that others will think that we have not achieved our position on merit. Well, when men are selected or chosen on the basis of merit, then we can start talking about merit. We should be looking at men and asking how they got there – it was not by talent alone, unless white middle-class men have the lock on talent… And there we have it: one of the problems is that in multiple subtle ways, the world tells us exactly that. Implicit biases dog us and multiply to become a society in which particular social and cultural categories dominate. We simply do not live in a meritocratic world as much as we might want to – we are always framed by our socio-cultural categorisations. And so we live in a world where, because of your gender, or your race, or your class (and complex combinations of these), you get a leg-up or a drag-down.

Women-only lists and prizes provide profile in a way that matters not just to those singled out but more widely. As Karen Burns argues, in her excellent article ‘Who wants to be a woman architect’, prizes for women in architecture are political acts because they make inequity obvious. If they weren’t there, the lack of women otherwise would go unnoticed. They make a point and, yes, it’s galling that the point needs making and shouldn’t that all be sorted by now. But we have the data that shows that it most certainly is not sorted and that gender roles are as sticky in the profession as they are in our households.

If we are to change the mindset, we need to dismantle the structures and cultures that naturalise it. To do that, we must be able to see how the inequities generated by gender (race and class) affect the bestowing of power and prestige in architecture. It takes more than wishing; it takes work. Women-only lists and prizes are one tactic – they provide us with a changed perspective and all architects know that looking at something from a different angle is key to making a breakthrough.

Dr Gill Matthewson is a researcher, architect and educator, based at Monash University. She is a co-founder of Parlour and her PhD ‘Dimensions of Gender: women’s careers in the Australian architecture profession’ was awarded by the University of Queensland in 2015.

Previous postCongratulations Emerging Architects! Next postWorking mother one year on