The numbers so far …

What can statistics tell us about the situation of women in architecture in Australia? Gill Matthewson outlines the data she has collected so far.

The first thing to know is that it is almost impossible to gain a complete or clear picture of the gender situation in numbers, based on current data. While there are data on the proportion of women and men graduating from architectural schools since 1999, no agency tracks how many are employed in the profession. What follows are our first efforts at mapping the distribution of men and women across architecture, both in education and in the profession.

In 2010, 975 students graduated from the second degree, 427 of whom were women (44%). This is consistent with previous years, as shown in the chart below: 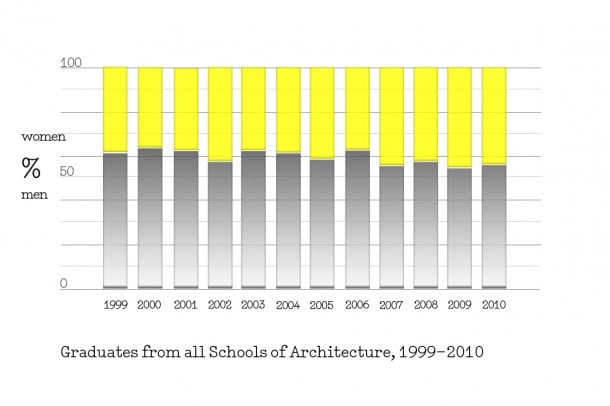 Women have averaged 41% of all graduates from 1999–2010. Pre-1999 data is currently not available, but we are in the process of researching this. Anecdotal evidence, combined with evidence from other countries, suggests that the proportion of women graduating with degrees of architecture has been at or near these levels for several decades.

However, this may not in fact be the case. New Zealand data, contained in Errol Haarhoff’s report, Practice and Gender in Architecture: A survey of New Zealand Architecture Graduates 1987–2008, shows a 45% graduation rate for 2001–2010 and 34% for 1991-2000. Although as a smaller country it may be showing some of the odd distortions that can occur with smaller numbers.

Numbers coming in are not the same as numbers going out. Last century (particularly in the seventies and eighties) there was a considerable attrition of women in the schools. This meant that the proportions of women entering the schools was much higher than the proportion graduating. Architecture usually has a reasonably high attrition rate, but it seemed to affect women even more than men. However this trend has shifted markedly over time, with increasing improvements over the years we have data for.

Intake each year this century has seldom varied from around 44% women. In the first five years (2001–2005) women were 40% of the graduates; for the second five years they were 43%. It should also be noted that individual schools have quite different patterns of attrition to the country-wide pattern. However, overall the trend is of equitable attrition.

Teaching Staff. We are in the process of establishing the proportion of women on teaching staff. Our first rough calculation is that they are around 30+% but this is very approximate. And once again individual schools vary considerably – some being as low as 17% and others at 43%. In some schools women comprise a higher proportion of sessional staff than permanent academics.

It is much trickier to establish women’s participation in the profession. If we take registration as a measure: there are 11,474 registered architects in the Commonwealth and 2336 of them are women, that is 20.4%. (For comparison, Paula Whitman’s report, Going Places, tells us that in 2004, women were 14.3% of registered architects.) These figures are far lower that what might be projected from the graduation rates, and lower than the professions of law (46%) and medicine (36%) with which architecture is often compared.1 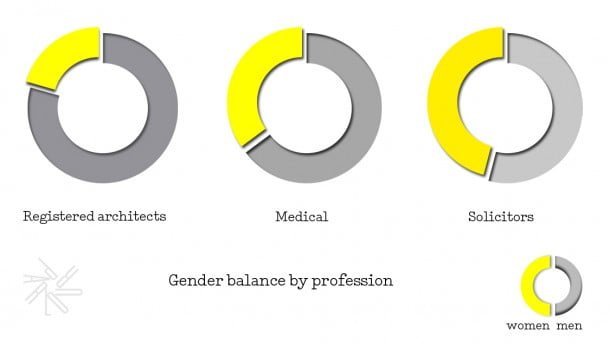 There are some problems with the registration data. Firstly: 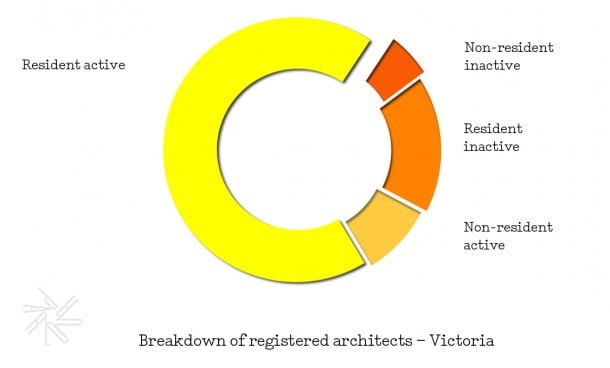 Our current picture of registration state by state is as below: 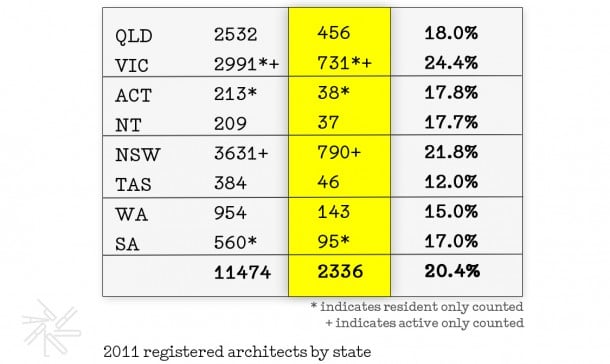 Secondly, not every graduate of an architecture school who is working in the profession chooses to register. New Zealand research by Errol Haarhof shows that less than 50% of graduates ever register; Australia is likely to be similar. However, it is quite possible to be working as an architect and not be registered. In this respect, architecture as a profession differs markedly from medicine and law where one must be registered or licensed in order to practise.

Canadian research in 2000 recommends the use of Census data rather than registration figures.2 Indeed, the 2006 Australian census shows double the number of women working in architecture than were registered in 2004 and therefore a higher participation figure. (Once the 2011 census has been processed we will be able to update these figures.) 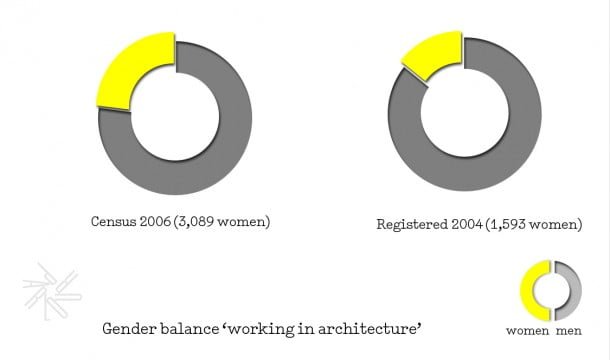 The census also reveals a striking pattern of women ‘disappearing’ from the profession as they age. 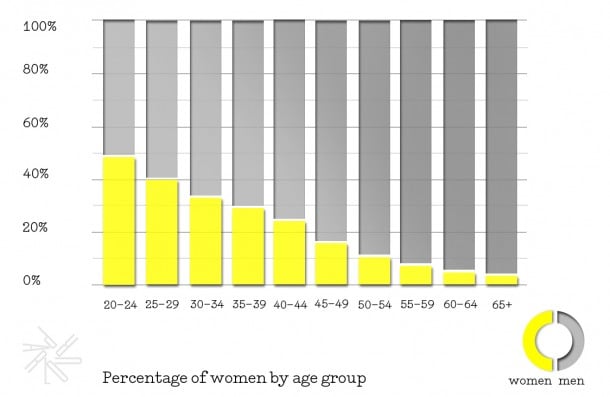 Our next step with this information is to map the proportion of graduates per age group (this will be approximate as every group of graduates will have more mature students in it).

Membership of the Australian Institute of Architects

Membership of the Institute is another way of measuring participation in the profession, although it needs to be noted that membership is not compulsory and many architects choose not to belong.

There are, as of 30 March 2012, 11,738 members of the Institute and 3,020 are women – this is 26%, which is higher than the registered proportion. However, there are different categories of membership and the overall pattern of membership differs quite markedly for each gender. 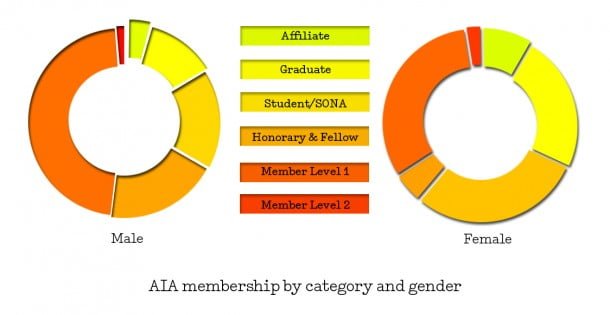 Overall, 40% of the total membership is in these non-registered categories. This once again indicates that the profession is larger than any registered count can give us, but larger for women. 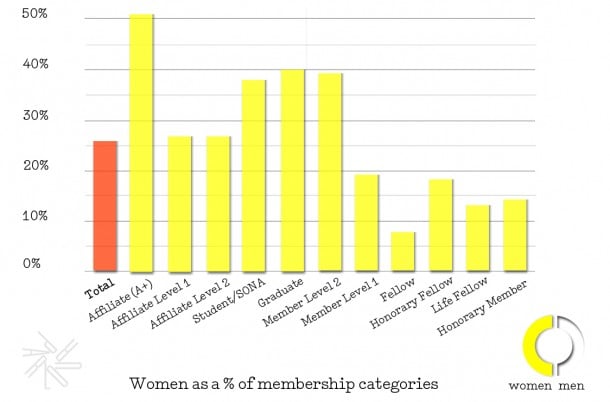 A similar difference along gender lines is visible when one analyses the membership according to their employer category. 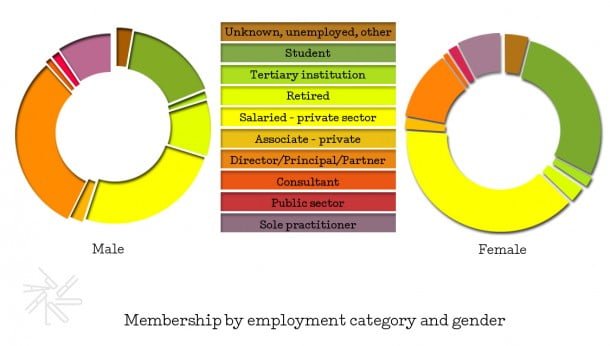 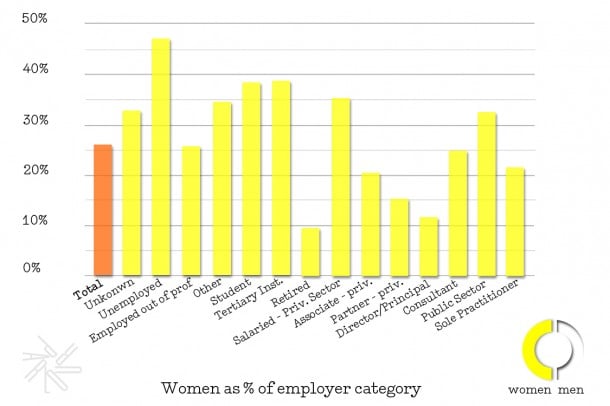 Member Level 1 is the category reserved for those who are directors, partners or equity owners of an architectural practice. This is the category which contains those who have reached the highest level of leadership in the profession. 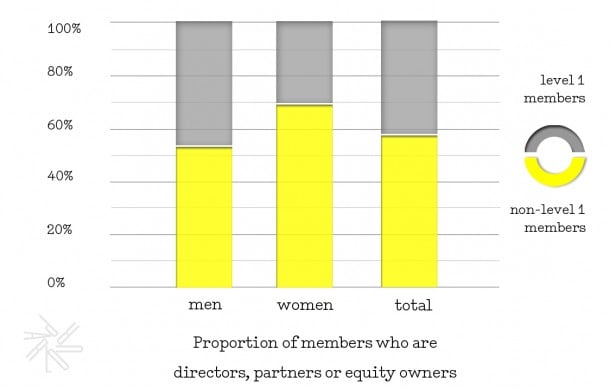 However, women make up 19% of this membership category (958 women, 4,101 men) – a level comparable to their proportion as registered architects (although under their overall proportion of the Institute).

These statistics have been sourced from a number of places.

At School statistics were extracted from Architecture Schools of Australasia (2000 to 2011 editions, November 2011) by Carol Capp, National Education Co-ordinator, Australian Institute of Architects. This has been supplemented by data from the 2012 edition.