PARLOUR: a space to speak – bringing together research, informed opinion and resources; generating debate and discussion; expanding the spaces for women in Australian architecture.
Readings

In recognition of the 150th anniversary of Marion Lucy Mahony’s birth in 1871, Annette Condello shares her recommendations for scholarly readings on Marion and her impact on popular culture. 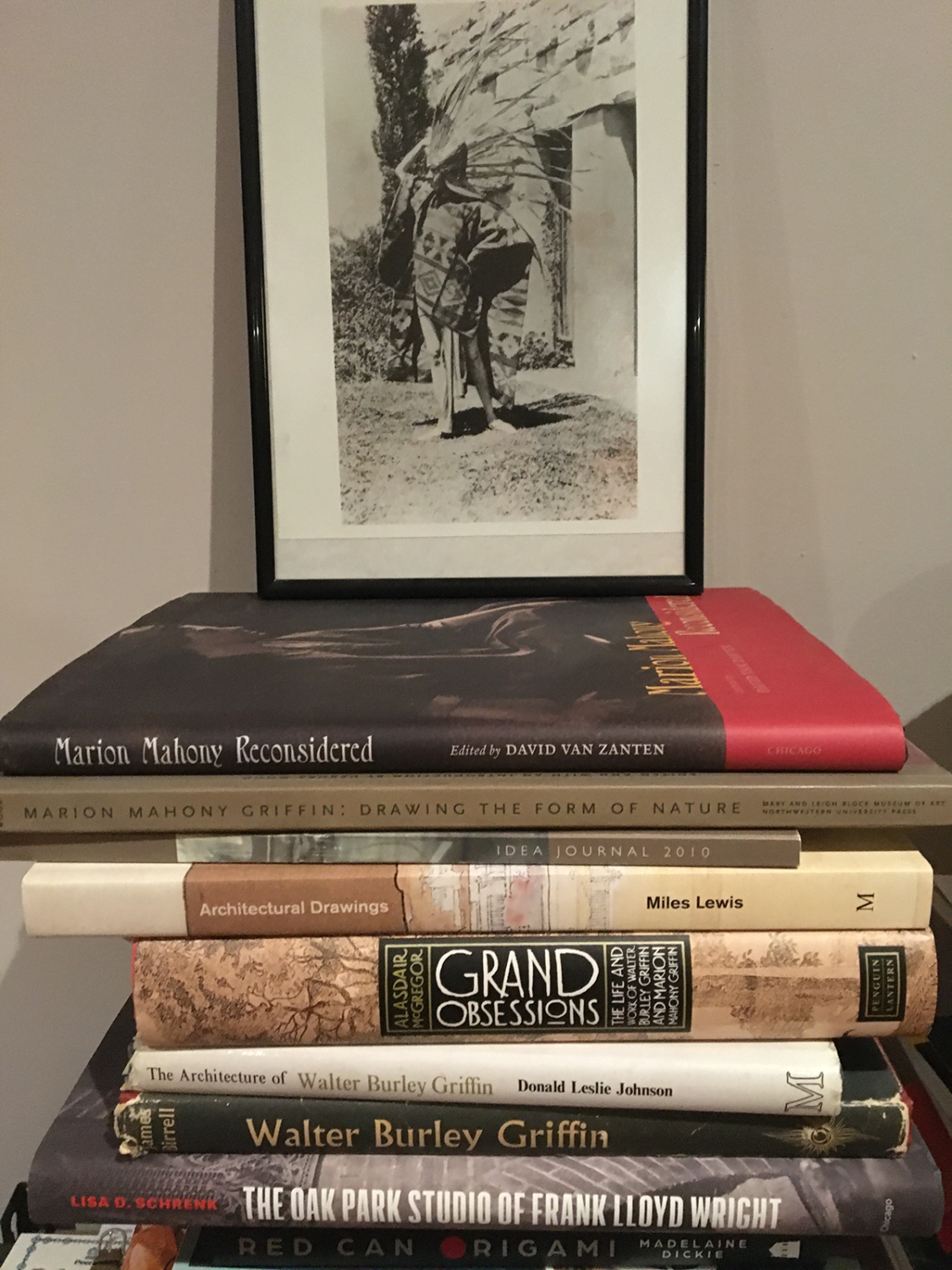 This year marks the 150th anniversary of Marion Lucy Mahony’s birth (14 February 1871). She is remembered in a range of ways within the profession. The Marion Mahony Griffin Prize, established in 1998 by the NSW AIA Chapter, awards and acknowledges the significant contribution of women to the profession for a distinctive body of work. Parlour’s own Marion’s List was named in honour of Marion.

The Earth is a living Being and at present we are killing it.—Marion Lucy Mahony

It is timely, then, to share a selection of book chapters and essays that elucidate her vast-ranging work and fascinating career. Marion’s work matters today. We can learn from her ideas and involvement relating to architecture, crafts and art, interior design, landscape architecture, anthroposophy, the Orient, cuisine, native plant species, modern Australian luxury and sustainability. Furthermore, we can gain an insight into her collaboration with others (and what not to do), be inspired by her innovative and relentless drive to produce multitudinal designs. Marion was also a creator of communities in Australia and, when she travelled back to Chicago at the age of 76 in the late 1930s, a family carer. Marion was 90 when she died.

For decades, architectural historians and scholars were slow to recognise Marion’s work. A couple of years ago in Lyon, France, I had a chat with David Van Zanten. The first architecture critic aware of Marion’s oeuvre, he wrote about her projects in 1966. Nearly a decade later, Donna Ruff Munchick from the Florida State University wrote an MA thesis on Marion’s work between 1894 to 1913. The first known critical appraisal of Marion’s work (a collaborative effort) was by Susan Fondiler Berkon and Jane Holtz Kay in 1975. Meanwhile in Australia, apart from James Birrell and Robyn Boyd who both cursorily mention Marion in their writings, there was little until James Weirick who published an article in Transition in 1988 about her architectural work at MIT.

My own interest began in the  late 1980s, when I was introduced to Marion’s modern architectural works by the late Judith Lyon, who enthusiastically showed me vintage photographs of the Castlecrag houses (found by Rachel Buckeridge) near Sydney. In books and in real life, I closely observed Marion’s technique of meticulously drawn Japonisme trees with brown ink on silk, emotive landscape features. Two decades later I visited these culturally rich architectural houses with Christopher Vernon, and we were lucky to have breakfast on the roof terrace at the Griffins’ Fishwick House (1929). There, I was astounded by the exactitude between the real scenery and Marion’s artistic representation as they were almost identical. We visited their projects in Lucknow, India, on many trips (with landscape architecture students) and each time we tried to locate specific buildings that were on the brink of falling apart or earmarked for demolition. Then, in 2005 I attended an international symposium on the work and life of Marion at the Block Museum of Art at Northwestern University in the USA. At that time I saw her grave marker at Chicago’s Graceland Cemetery columbarium.

At the National Library of Australia in Canberra, a collection archived and curated by Christopher Vernon at The Dream of A Century: The Griffins in Australia’s Capital exhibition, I was struck by the luxuriousness of the Café Australia Menu graphics and superb crockery designs as well as the Capitol Theatre’s skyscraper drawings. I decided to research these designs. 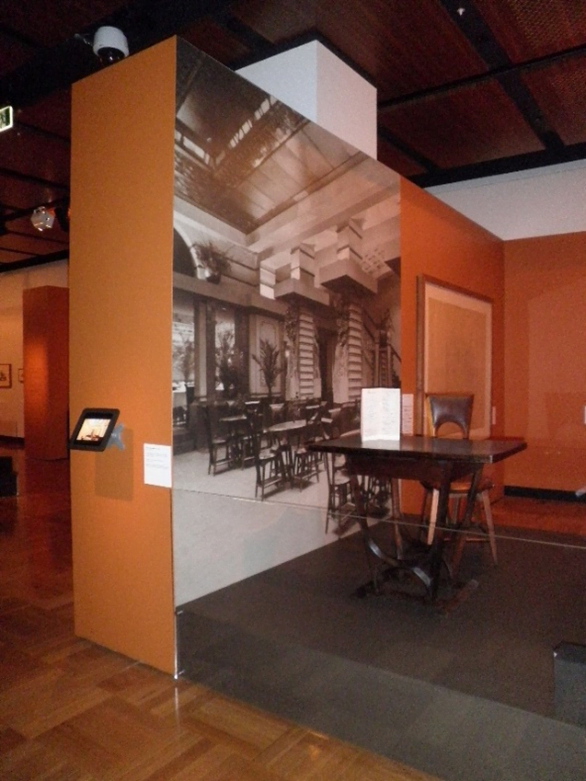 Christopher Vernon’s exhibition at the NLA, which included an installation of Café Australia. 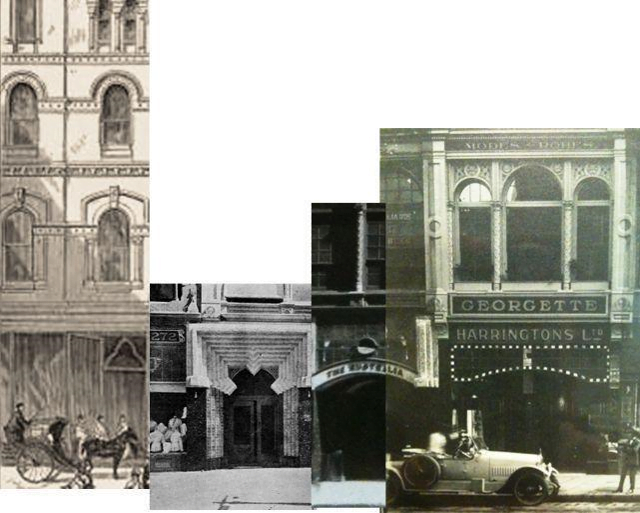 I hope that this selection of specialist readings will enrich many other people and encourage others to observe and be impacted by the vast-ranging list of academic works and articles about Marion’s architecture.

This collection of essays outlines how Marion contributed a new design image not only in Chicago, but also Australia and India. It presents a comprehensive appraisal of the ups and downs of the Griffins career pathways, which spanned the Arts and Crafts movement and the modern era. It showcases Marion’s drawings of Canberra as an organic utopia and Castlecrag as the Griffins’ main base where they contributed many designs into the best Australian garden suburb.

This article surveys the contribution of Marion and Florence Taylor to the women’s section of the NSW Town Planning Association and how both women were at loggerheads with one another in 1915. Marion was portrayed as “upsetting everything” but in the end earned respect as “all right and has a good head”.

Marion’s pioneering graphic work and innovative representations of the natural landscape are recognised in this book. Through vintage photographs of her life and work and public murals, it includes captions from her memoir, The Magic of America. The text also beautifully illustrates the botanical forms and the existence of fairies that were woven into Marion’s children’s book illustrations and murals in the rich Australian Forest Portraits.

“The Silence of the Mountains and the Music of the Sea”: The Landscape Artistry of Marion Mahony Griffin

This inspiring essay expresses how organic architecture derived its forms from nature, and includes a thorough investigation of Marion’s exquisite architectural and botanical drawings. For Marion, the Forest Portraits became purposeful architectural renderings. This article also shows how Marion’s Meso-American interest and her enchantment with the eucalypt-green landscape became a catalyst for other horticultural investigations and new directions.

An erudite article that clearly demonstrates the nuances of Marion’s long career, it emphasises how the depictions of her in secondary sources reflect and reproduce a set of cultural biases related to women and creativity. Then, it expands upon the neglect, depictions of her as “unnatural” and “ridiculous” and her early contributions to architecture, written by various historians on Marion’s architectural work. It also explains how some authors described her as “bitter” or “looked distinguished, but entirely unwomanly or old maid status” and the rest.

An intriguing and enjoyable read about the anthroposophical festivals at Castlecrag. The book describes the period when the Griffins found the place and created a harmonic community with the native environment. And it tells the story of their life during those two decades.

“Interior Luxury at the Café Australia”

This article discusses the Griffins’ Café Australia design as Australia’s first modern adaptive reuse project, considered through the lens of luxury. It surveys the place and its predecessor’s interiors and positions them within the Melbourne wider café scene, aiming to cultivate an appreciation of the Griffins’ café as a luxurious venue. With the Café’s completion in 1916, the Griffins realised the most luxurious interior erected in Melbourne, if not the country, up until then and established a new pinnacle of ‘Australian’ luxury.

As an architect and artist, Marion was beyond capable. She was extraordinary and significant. This is a critical analysis about Marion’s life within and outside the City of Chicago and her working relationship within the “men’s club”, mainly Frank Lloyd Wright, at his Oak Park Studio. It also discusses her so-called bohemian lifestyle with her husband, Walter Burley Griffin, in Australia. It comprises chapters that raise new insights into her entire remarkable career.

A meticulously detailed biography of the Griffins in Australia, which outlines the story of how they were commissioned projects, specifically the Canberra plan, Castlecrag and Newman College, and the battles they experienced. The book expands on how Marion’s extraordinary achievements were rarely credited as her own achievement.

“Garish Luxury and the ‘Constructed Landscape’: Transcending the Colour of Opals in the Griffins’ Capitol Theatre”

Annette Condello is a Senior Lecturer at the School of Design and the Built Environment at Curtin University, Perth.