Women in the Street

“The march … shows us how space can be reconfigured and refreshed with new meaning”. Karen Burns reflects on protest and the transformation of the street by the fluid body politic.

I write this at the end of a long day of powerful images pouring through social media: of women, men and children, white, black, Muslim, Christian, Jew, Latino, queer, trans; all united, marching, and taking over the street. Why is the street such a potent space for protest? This weekend some media commentators have dismissed the brief, feel-good moment of street marching with the coda that it was hardly long-term political action.[1.Cognizant of this, the Women’s March organisers have already kicked off the next step – the 10 Actions 100 Days program, whereby every 10 days they announce a new action that can be taken by all. ] But it’s worth taking another look and reflecting on the alchemy of citizens taking over the street.

As one canny writer has reminded us this weekend, women’s protest in the street has twice been the incendiary spark that changed the course of history.1 In 1789, women’s bread riots in Paris were the match that lit the revolutionary flame. Desperately hungry from food shortages, women marched on the seat of municipal government, were refused entry, stormed the building, seized swords and cannons (go sisters) and then marched on to Versailles, home of the French King. You’ll remember, of course, that this revolution brought forth the Universal Declaration of the Rights of Man and then Mary Shelley’s glorious declaration of the Rights of Women. Slaves in Haiti used the first declaration to rise up against the terror of the slave system and boldly assert their own humanity. Struggles for human rights have long been interlinked as we saw in the coalition crowds today.

Some one hundred and thirty years later, on March 8, 1917, women in Petrograd, Russia were pissed off with food rationing and poured into the street to swell the ranks of male protestors striking against the Tzarist regime. The women headed for the factories to recruit another 50,000 workers for the strike. And then the rest – as they say – is history. 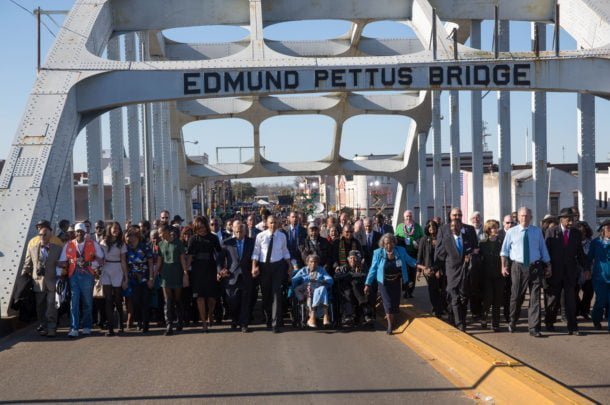 “The Obamas and the Bushes continue across the bridge.” Official White House Photo by Lawrence Jackson.

The recent film portrayal of the historic civil rights march for voter registration when protestors tried to walked peacefully from Selma, Alabama, to the State capital Montgomery in 1965 was dominated by a powerfully composed architectural visual. This composition also governed the commemorative re-enactment of the protestors’ march across the Edmund Pettus Bridge. Framed within the foreground of the road tarmac and enclosed by a gridded armature of iron bridge engineering; President Obama walked in centre shot in a front row of surviving marchers linked arm in arm. The news footage of the bridge and the crowd moving across it scorched a powerful image into collective memory of the straight lines of bridges, roads, side walks and engineering structures – of concrete and iron – as the space that citizens flow across and flow through. This visual contrast between the orthogonal geometries of city infrastructure – of roads, sidewalks and grand boulevards – filled with a moving throng of people appeared in media streams everywhere today. Washington was the Pettus Bridge, and Paris. Modern cities everywhere offered up the image of the orthogonal street and the fluid form of the citizens’ body politic.

This image is enough to speak back to the naysayers who raise their eyebrows and dismiss the political effect of the march in the street. These dismissals present formal political action – election to the senate or congress and legislation – as the measure of political effectiveness. Historians of women’s history know a thing or two about this. They’ve long written about how histories focussed only on the formal process of politics leave out women: leave out women’s community organising and strikes, leave out women’s product boycotts and counter-community organisations, leave out their mail-outs and at-home parlour meetings to turn out the vote.

What happens in the street? In street marches, the formal planning of cities evident in sidewalks and boulevards is the visual frame for the clash between top-down politics and citizen-up political action. But of course it is more than this. The march is the moment that shows us how space can be reconfigured and refreshed with new meaning. The everyday space of cars, retail, jaywalking, clicking traffic lights and the commuter head-down texting furiously, is transformed into another purpose. The street and the squares are the only places big enough for a mass of citizens to get together. And the being together is important.

Being together, chanting together, making random remarks, snapping photos for Facebook feeds are interactions in a temporary physical coming together of citizens. Protests affirm the community of like-minded citizens who otherwise dwell in individual homes or in small collectives inside buildings. The street enables and affirms connection.

Streets materialise the bodies in the metaphor of the ‘body politic’. This is a smart bit of philosophy. The body politic is supposed too big a figure of speech, like the crown as the metaphor of the monarchy. But protest in the street allows the metaphor to become a living thing: to show the image of democracy as thousands, millions of individuals wedded in common cause. The moment where the metaphor becomes literal is potent.

Identity, as Judith Butler once famously observed, is not rigid, but is a performance that conventionally has to be performed again and again to sink in. For example, if I always tick the square marked ‘F’ on consumer surveys this reinforces my identification with the female gender. The street protest lets us use performance to rage against our atomistic individual identities. In the street protest we can feel, be and live collectivity and group identity. Without this dynamic connection between individual and like-minded people we can’t have voting along party lines or a sense of our greater community, city, national, or even world identity.

The street is ordinary but can be transfigured. Historically of course, women’s access to public space and the right to walk the street alone has been the subject of a long political struggle. The right to walk the street free from harassment and violence continues. But the street is also a powerful frame as a space to be overflowed: a place for the fluid form of a citizen’s living body public. The tangible embodiment of collectivity and organising and the assertion of the democratic right to peacefully disagree, are all created in the geometries of the street. In the protest, the orthogonal frame must embody the formal rules governing every day life in order that the body of the citizenry can flow across it, and assert in their fluidity; the manifest aliveness of citizens in protest. Today newspaper compositors showed image after image of this view: of the static orthogonal street, square and mall with its boundaries overflowed by a moving mass of people, in city after city. The street protest is about Trump, but also not. It’s a place for connecting protestors to fellow citizens; a place for letting people know they need not be alone in their grievance, despair, anger or discontent; a place for embodying the will of citizens. The street is the place to demonstrate the difference between representative democracy – our elected officials who act on our behalf – and what new leftists in the 1970s called ‘direct democracy’; the involvement of citizens.

The 1980 competition winning design for Australia’s New Federal Parliament design tried to give space to both these forces in a half-buried building that housed the two chambers of Westminster democracy, but was roofed by a hill that citizens could walk on and march over. I didn’t like the building much when it opened, but I think I might have been wrong. A building that inverts power structures and allocates citizens a top-down space in the formal house of governance is a metaphor, but it is also an idea to keep faith with.

We conflate literal and metaphorical spaces because this powerful conjunction makes place alive with possibility, with citizen connection, portent and action.

Canberra’s grassy knoll, open to all, has suddenly become a litmus test, as our politicians plan to erect a fence to prevent public access (and the citizens roll down it in protest). The prospect of loosing places we might previously have dismissed as too literal is a sharp reminder of a place of public openness that now seems far, far away. 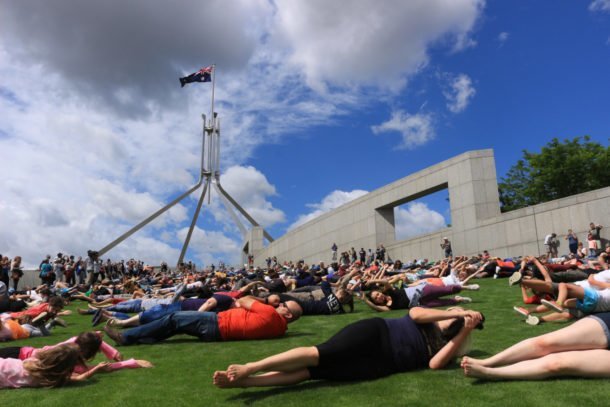 “Big Roll Up for Roll Down” Photo Mike Welsh. https://mockeryofshockjockery.wordpress.com/2016/12/17/big-roll-up-for-roll-down/

What looks symbolic today is a fragment of a literal past; it has powerful purchase on our present because it reminds us that things were once different.

Today’s marches in the US, and across the world, have called forth collective media memories of marches past. This is a good thing. The march recollects the history of democratic action – we see the familiar geometries of the mall of protests past in the news footage of civil rights demonstrations and marches against the Vietnam War.

I keep seeing the mall as the constant symbol of spatial order, but that wide broad avenue has become a powerful visual measure in media comparisons of Trump’s low numbers in contrast to the swelling crowds of Obama’s inauguration. The street or mall is now the frame for measuring loss and low engagement. Suddenly, watching the news, my certainties about the political geometry of orthogonal streets and fluid crowds have been reversed, but I suspect that it is the dynamic between the two that remains at the heart of things.