The revolutionary beginnings of IWD

Anwyn Hocking reflects on the socialist beginnings of International Women’s Day and remembers the women who rallied for a different version of IWD. 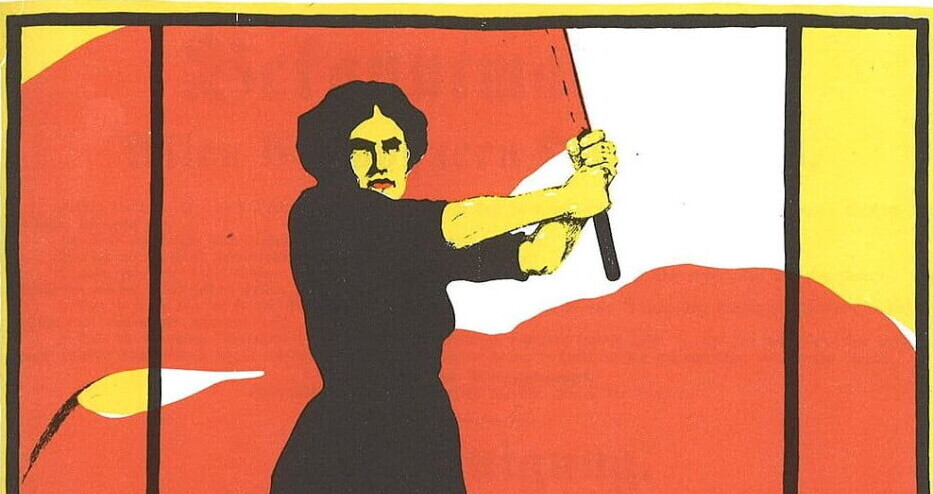 While most of us enjoy a cupcake every now and again, the corporate co-opting of International Women’s Day (IWD) with baked-goods and pastel-toned Instagram posts is decidedly different from its revolutionary origins. This year we reflect on the Day’s socialist beginnings and recall the women who were at the forefront of a very different type of IWD.*

According to the most prominent IWD website, created by a private “gender capital management” firm, IWD is “a global day celebrating the social, economic, cultural and political achievements of women”. To “celebrate women’s achievements or rally women’s equality,” the website recommends that one “of the most powerful ways” groups can support IWD is through championing hashtag social media campaigns, as well as downloading IWD selfie cards and buying IWD merchandise.

Whether such tokenism sparks meaningful discussion or practical action towards gender parity is somewhat questionable, yet marking this historic day remains an essential step in feminist efforts towards gender equity globally.

These points were covered eloquently by Dr Kaye Quek and Dr Meagan Tyler in a special IWD Minefield podcast in 2020.

The origins of IWD

The history of International Women’s Day is tied to the late 19th and early 20th-century international socialist movement. The first National Woman’s Day (note originally singular) was observed on 23 February 1909 in New York City and organised by the Socialist Party of America. This day was thought to commemorate a spontaneous demonstration on 8 March 1857, by New York City women garment and textile workers protesting low wages, the 12-hour workday and increasing workloads. Fifty years later, in 1907, a rally reportedly commemorated this event’s anniversary, morphing into IWD. Yet, neither of these events seem to have actually happened. Instead, as scholars Kandel and Picq argue, these apocryphal stories emerged in the 1950s as an attempt to “detach International Women’s Day from its Soviet history in order to give it a more international origin, more ancient than Bolshevism, more spontaneous than a decision of a Congress.” 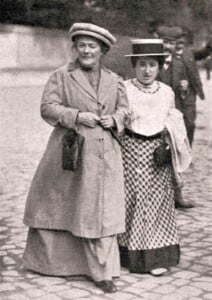 The real history of IWD, however, is connected to the political life of German socialist Clara Zetkin and the events of the February Revolution in Russia. In 1910, at the International Socialist Women’s Meeting in Copenhagen, Zetkin tabled the idea of International Women’s Day to make male-dominated European socialist parties take the question of women’s rights seriously. The proposal received unanimous support from more than 100 women representing 17 different countries, but a specific day was yet to be set.

In the following years, IWD was held in mid-March across Europe and late February in the United States. In 1914 in Germany, IWD was held on 8 March, though this may have simply been because it was a Sunday. However, it wasn’t until the dramatic events of 1917 that IWD became more closely linked with 8 March.

Against the backdrop of the war, women in Russia, led by feminist Alexandra Kollontai, chose to protest and strike over deteriorating living conditions and food scarcity in Petrograd on the last Sunday in February (8 March on the Gregorian calendar). Two days after the women’s insurrection, the Czar ordered the military to shoot if necessary to suppress the women’s revolution, spurring the February Revolution. Riots and strikes over working conditions, housing conditions and the scarcity of food erupted across the city. One week later, centuries of czarist rule in Russia ended when Czar Nicholas II was forced to abdicate, dramatically accelerating Russia towards its communist revolution. The provisional government granted women the right to vote. 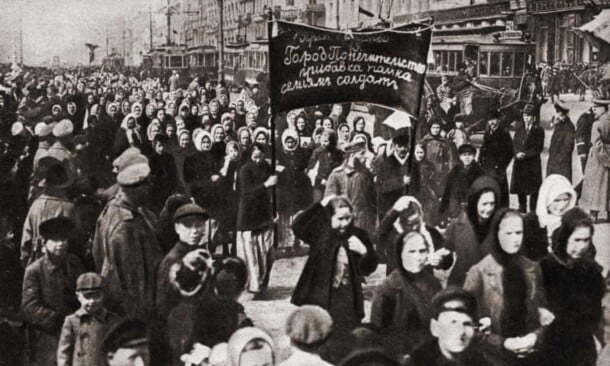 Women’s march for ‘bread and peace’ in Petrograd (now St Petersburg) on 8 March 1917.

The remarkable events of March 1917 set the date for the celebration of IWD and in the following years more countries across the world joined the celebration. In Australia, the first IWD took place in Sydney in 1928. Coordinated by the Militant Women’s Group of the Communist Party, women called for equal pay for equal work, paid leave, and an eight-hour working day for shop girls. By 1931, annual marches were taking place in both Sydney and Melbourne.

International Women’s Day (it changed to plural sometime after 1945) largely remained a communist holiday until the feminist movement adopted it around 1967. In 1975, the United Nations began commemorating IWD, and in 1977 officially formalised the Day to assume a “new global dimension”, inviting member states to proclaim 8 March as the UN Day for women’s rights and world peace. 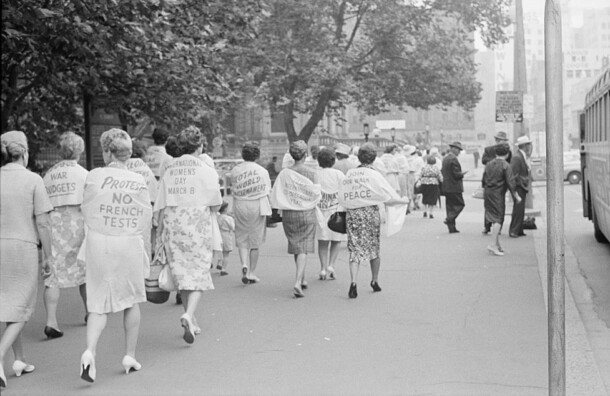 IWD March from Bathurst St in Sydney, 8 March 1965. The Tribune.

Why IWD is important today

Only one-quarter of those who hold arguably the most power, the world’s parliamentarians, are women, a figure similar to the number of women in Australian architecture who run and own practices. In Australia, women earn on average 14% less than men per week in full-time employment. Beyond the workplace, only 40% of women feel safe walking alone at night in their communities. And when you look at the statistics, the fear makes sense. In Australia, one in six women (17%) have experienced an episode of stalking since the age of 15, and 87% of Australian women have experienced at least one form of verbal or physical street harassment.

The need for the IWD aims of “building support for women’s rights and participation in the political and economic arenas” speaks for itself in the statistics. But, closer to home, if women are viewed as human beings only in relation to men – as implied in mid-February 2021 by our prime minister’s need to consider a Parliament House alleged rape victim “as a father first”– and the PM openly worries about gender equality threatening men’s power at IWD events, International Women’s Day is as relevant today as it was over a century ago.

Today’s world looks markedly different from the world of 1917, but we can find inspiration in recalling what women of the past were rallying for and their achievements in creating real change. The feminist movement has grown more inclusive and we are more aware now of the complex intersections of sexual orientation, ethnicity, culture and socioeconomic background that result in a variety of experiences and perspectives that make achieving gender equity all the more complicated. Armed with over a century of knowledge and progress, we have a solid foundation to continue demanding change. Indeed, the widening gender imbalances caused by COVID-19 make how we challenge gender inequity this IWD all the more urgent for the lives of all women. 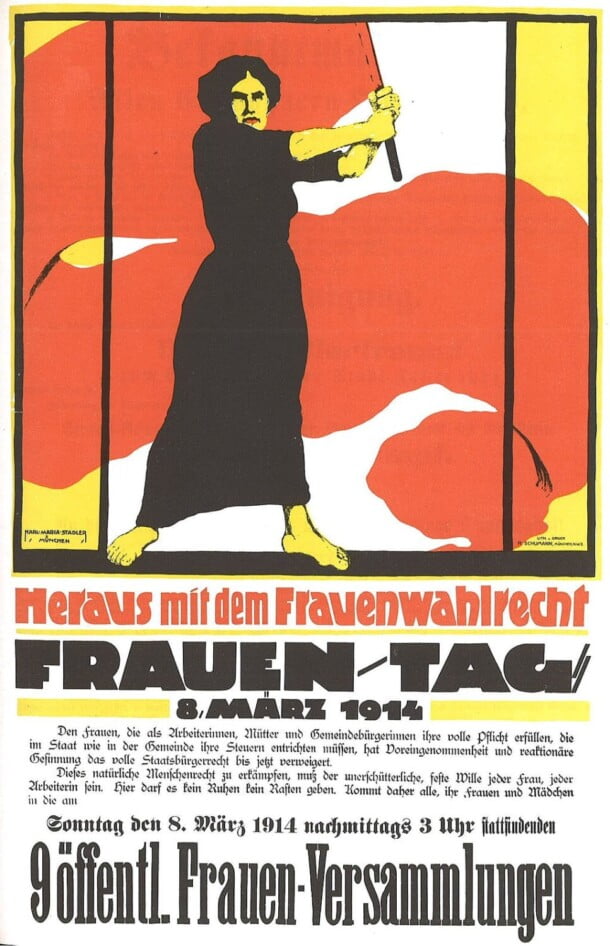 Anwyn Hocking is a researcher and designer working with Parlour and Monash University XYX Lab. She recently completed her MPhil in Architecture and Urban Studies at the University of Cambridge as an Ackman Trust Scholar, Bateman Scholar and recipient of the 2020 Dalibor Vesely Prize. Her research interests traverse sociology, epidemiology and architecture to explore experiences of identity, community and wellbeing within different urban typologies.

* The terms woman/women are used as inclusive of all women, and by extension girls, including cis-women, trans-women and intersex women. 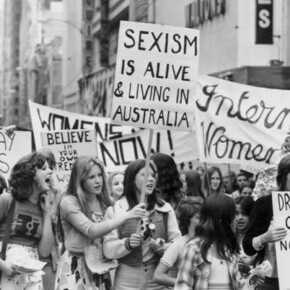 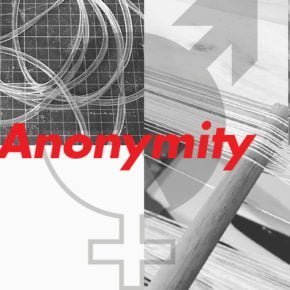 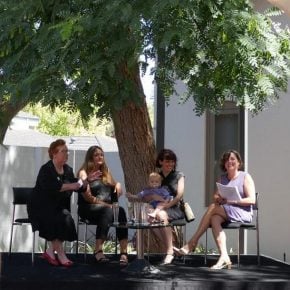 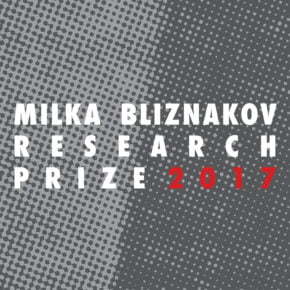