Julia Donoho was the force behind Julia Morgan receiving the American Institute of Architects’ Gold Medal, the first woman so honoured. She outlines her strategy for redressing the striking gender imbalance in the world of architecture awards. 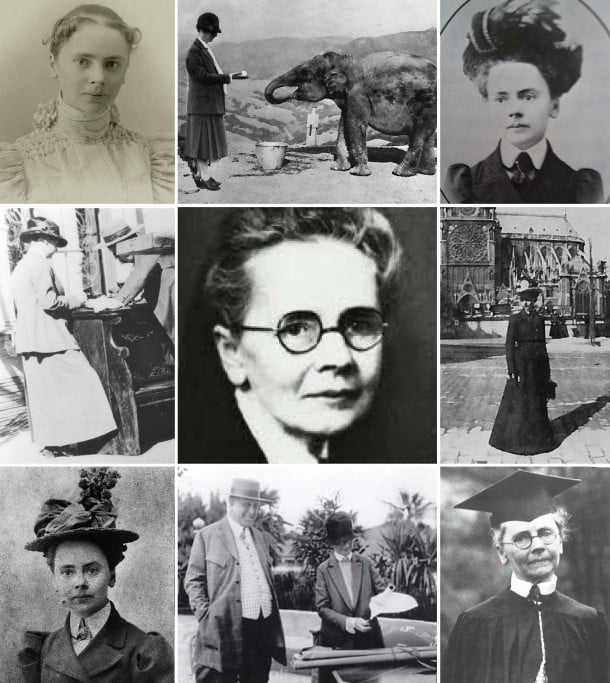 In 2014, the American Institute of Architects (AIA) recognised Californian architect Julia Morgan, FAIA, as the recipient of the Gold Medal, 57 years after she died. It was the 70th Gold Medal awarded, and Morgan was the first woman to receive the honour. Why is this so important, how did it happen, how could you repeat the same effort, and what does it signify for the future of the profession and awards programs?

Why is it important?

Globally, in a comparison of ten top awards in architecture, 13 women have won top honours out of 442 medals awarded. 1 Statistically, that means 4% of the top honours are going to women, and 96% to men. Of these, six women have been recognised as solo practitioners, six have been recognised as part of a duo, and one was recognised in both ways. Of the solo practitioners, five were recognised for design work – Julia Morgan, Zaha Hadid, Brit Andresen, Kazuyo Sejima and Gae Aulenti – and two were recognised for theoretical and other contributions – Jane Jacobs and Phyllis Lambert. That means only 1% of medals have been conferred upon female design architects, individually. We must shift this statistic.

Another way to look at this is by the decade. There were no medals to women before 1979. Since then the statistics per decade have varied between 2% and 10%. This decade we are at 10% so far, and things are looking up. 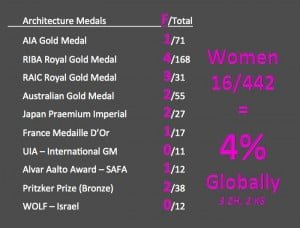 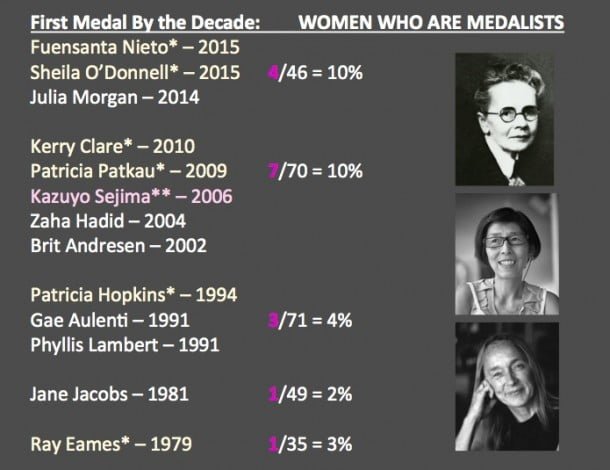 How did it happen?

In 2009, at the AIA Women’s Leadership Summit in Chicago, Illinois, Beverly Willis, FAIA, asked us ‘Why can’t the AIA GIVE a Gold Medal to a Woman?’ It reminded me of the parable where the poor man asks God, ‘Please make me a winner of the lottery.’ God’s response was ‘BUY A TICKET’. Gold medals are not given from above. They are earned and they are fought for. It is no easy task to do a lifetime of work, and to get this recognition above all your peers. At the time, I wondered which women had even tried and what the process was like.

Three years later, through involvement with my local and regional chapter, I was elected to serve on the National Board of Directors (BOD) of the AIA. I got to observe the process first hand and learned that I was eligible to nominate candidates for the Gold Medal. Immediately I assessed a variety of candidates, living and dead, who could best represent the quality and capacity of women in the field of architecture. I settled on Julia Morgan, and proceeded to acquire approvals and acquiescence of my colleagues in California and BOD directors. I inquired whether the nomination would be well received by Helene Combs Dreiling, who was then President Elect of the Institute and would be the President who conferred the 2014 medal. Getting all of these people to agree it was a valuable nomination, before starting to work on it, was the key to moving it forward.

How could you repeat the same effort?

In America, we have a rigorous four-step process for deciding our Gold Medal recipients. First the nominee submits a detailed portfolio, then a Gold Medal Jury reviews all the nominations, forwarding a shortlist of three candidates to the BOD. The nominator arranges a presentation before the BOD, and then the AIA Leadership vote for the preferred recipient. This process is the most rigorous process among the ten awards studied, the hardest to win, and is only given for a significant body of work of lasting influence on the theory and practice of architecture.

For the first step in ‘BUYING A TICKET’, I determined to copy the example of the 2013 gold medalist, Thom Mayne. He had a very nice portfolio. Gathering input from all the authors who had worked on Julia Morgan books, I formatted Julia Morgan’s submission to match Mayne’s, ensuring page for page the gravitas of each piece. Her 700+ project list made this easy, and the photos in the monographs made it beautiful. I started out seeking the five letters of support from a Politician, an Owner, a prior Gold Medallist, an Architectural Historian, and a Community Heritage Preservationist. Once we had five letters, then we looked for better letters. Ultimately we used letters from Michael Graves, FAIA, Frank Gehry, FAIA, Denise Scott Brown, Int. FRIBA, Maria Shriver, Former First Lady of California, and U.S. Senator Dianne Feinstein.

During the course of the year, I put in significant effort to educate AIA leadership about Morgan’s history and work. After Morgan was shortlisted, we invited Jeanne Gang, FAIA, to make the presentation to the AIA Leadership group. She did a very nice job and won the confidence of the room.

Because Julia Morgan was dead, we considered asking the AIA to give two gold medals that year, one living and one posthumous, but reconsidered once we saw the quality and breadth of the work, together with the support. We realised Morgan was a true gold medal architect, there was nothing token about giving her this award, and we maintained that she deserved the recognition. Ultimately, everyone agreed.

The Gold Medal Nomination Packet is available in a magazine format (US$24.99) or PDF ($US5.99). It includes photographs and essays from various Julia Morgan scholars and serves as a good introduction to Miss Morgan’s work.

What does it signify for the future of the profession and awards programs?

The reasons why so few women have been recognised are various. Regardless of what reasons there may be, what is clear is that we need more women vying for awards to shift the results. It is time for everyone to get involved and to make this a priority. The Queen of England recently announced that Zaha Hadid will be the winner of RIBA’s Gold Medal in 2016, her third top award. This followed the RIBA’s 2015 Royal Gold Medal to a husband and wife duo, Sheila O’Donnell and John Tuomey. An historical architect – Elisabeth Scott – was also included in the artwork for the new U.K. passport. So it seems the impact of recognising Julia Morgan in 2014 is having a larger ripple effect globally.

Women have practised architecture since the 19th century. It is time that all women in the profession include in their business plans, the necessity and importance of recognition to their work and to that of their peers. There are so many different awards in our profession and communities. At the 2015 Women’s Leadership Summit in Seattle, I asked everyone there to think ahead about awards in three ways – What awards will you be considered for this year? Who will you promote for an award this year? What other architect who is already recognised will you learn more about this year? Together we can move the needle, and everyone can be part of the success.

Please – go forth and BUY A TICKET!

Watch the 2014 AIA Gold Medal video on Julia Morgan, and a longer one with comments by Beverley Willis.

Julia Donoho, AIA, Esq. is an architect, attorney and author, the co-founder of the Julia Morgan Foundation and an advocate for the profession of architecture. In 2015 she served on the AIA National Strategic Council, and from 2013–14 was a member of the AIA National Board of Directors, representing California.