‘We judge everyone on merit’

When discussing gender equity in architecture, Sarah Lebner finds that she is often met with the comment, ‘Well, we judge based on merit at our firm’. Sarah wrote this fictional piece based on her experiences and the first-hand observations of friends and colleagues to raise awareness of the dangerous subtleties that drive the inequality in our industry. 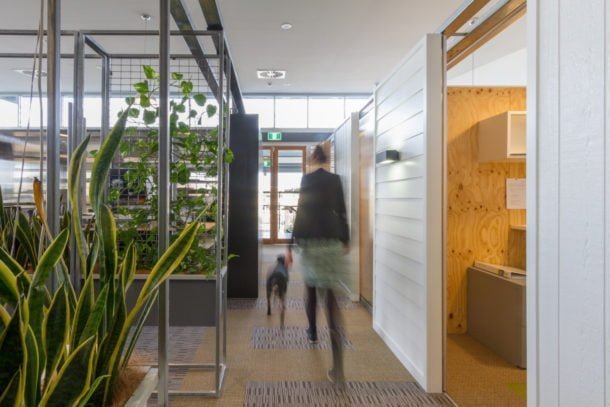 Georgie climbs out of bed and begins picking an outfit for the day. She’s flicking through her jackets, subconsciously looking for one that is nice enough to look respectful, but not so flattering that it draws unnecessary attention to her figure.

She has a meeting on site with the builder before she heads in to the office. She jumps out of the car and puts on her high vis vest that she rubbed on the garage floor when she first got it so she didn’t look too ‘new’.

She greets Mark the builder with a handshake as he directs her towards his first question. She really likes working with Mark – he’s young and respectful, and far easier to communicate with than other more traditional builders she’s had to work with in the past. However, this doesn’t remove the constant awareness that she is the only female on the site, and there are currently eight other tradesmen there.

She smiles hello to the two brickies on her way past. She’s met one before, but the second reminds her of her cousin who’s constantly talking about women in terms of their physical traits and sexuality. The poor bloke hasn’t said anything but she can’t make eye contact with him because she’s back to that feeling of being seen as a piece of meat on a stick. Although she’s glad of the modesty her jacket affords her, it’s warming up quickly and her skin starts to prickle. The roofer has his shirt off already. She envies him being so comfortable in his half-naked body, on display to the whole street. Then Mark pauses and she realises she missed a question and politely asks him to repeat it.

Inside they move on to the bathroom where Bill the plumber has already knocked off for smoko. He’s in his late 50s and she’s pretty sure he thinks she’s not capable of her job as a young blue-eyed girl. This puts her on edge as they discuss the set out for the basin. Luckily she made a mental note of last night’s footy result while she was eating breakfast. She tries to break the ice with Bill, but as she hears the friendly sporting jibe come out of her mouth, she wonders if she is trying too hard and sounds completely ditzy.

When the meeting is over she changes back into her office shoes and takes a layer off. Back to the comfort zone of the office.

She smiles at Sue, the admin lady, and calls out ‘Morning Beth’ as she passes the female student architect who has been given the task of preparing another interior design rendering.

‘Where’s Matty?’ she asks about the male student.

‘Oh, he’s in a meeting with Jamie and the structural engineer,’ Beth answers.

She sits down next to Leo. She and Leo were great friends at uni and somehow managed to get the two graduate positions together at their firm four years ago. She gives him a warm smile. She’s so thrilled for him because last night he called her after work to let her know he’d got a promotion to Associate. She thinks he really deserves it. After all, he has more experience dealing with consultants than her, and is more confident on site than she is. Plus, he just got married so no doubt kids will be coming soon and he could use the extra cash.

This thought switches her focus back to the project proposal on her desk. She’s been mulling over whether to put her hand up as project architect. It would be a great challenge and wonderful experience. But a little voice in the back of her head points out that she and her partner are thinking of trying for a baby soon and maybe she shouldn’t think of committing to a two-year project in case she gets pregnant. After all, maybe Leo wants it. She wouldn’t want to take it off him.

Her boss Adrian walks past, on the phone. She admires his phone manner: firm, confident, bold. He’s so convincing when he’s talking to his developer mates and always seems to get them across the line – although she’s not sure if that’s because of his phone manner or because he schmoozes them in his member’s box at the footy.

He sounds a little less confident today though. Maybe this is the new developer, Tracey. It appears she’s asking him about the gender equality profile of the firm. He seems a bit shocked to be asked about this in a first conversation, but he recovers quickly and proudly states that firm employs a 50/50 balance of men and women. Tracey appears to ask something else and he responds, ‘Well, we would be uncomfortable assigning a female project architect to you purely based on gender – we’re firm believers of judging on merit here.’ He winks at Georgie, proud of his response and, while he’s waiting for the woman to stop talking, gestures towards her blouse and mouths the compliment, ‘Nice top’.

Georgie smiles a gracious smile and gets back to work. ‘He’s right,’ she thinks. ‘I’m so lucky to have a job in a firm that judges on merit, not gender.’

Sarah Lebner is the Lead Architect at Light House Architecture and Science – a multidisciplinary firm that aims to simplify the sustainable design process, to create comfortable, clever, energy-efficient homes. Sarah also tutors at the University of Canberra and sits on the Design Advisory Panel for Transport Canberra. However, Sarah is most proud of her toilet building experience, having erected outhouses in Kenya, the Solomon Islands, and along the Murray River.