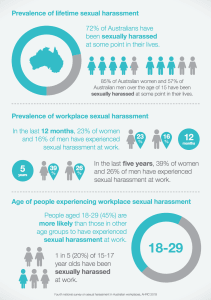 Between April and June 2018, the Australian Human Rights Commission (AHRC) conducted a national survey to investigate the prevalence, nature and reporting of sexual harassment in Australian workplaces and the community more broadly. The AHRC found that one in three workers in Australia said they had been sexually harassed at work over the last five years, with 39% of Australian women and 26% of Australian men experiencing harassment. Young people between the ages of 18 and 29 were the most likely to be sexually harassed at work. 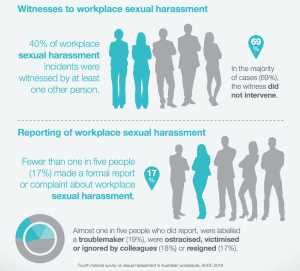 At the launch of the report Everyone’s business: Fourth national survey on sexual harassment in Australian workplaces in mid-September, Sex Discrimination Commissioner Kate Jenkins said: “We can learn a great deal from this year’s national survey. It confirms that sexual harassment is widespread and pervasive. An extraordinary number, one in three people, have experienced sexual harassment at work in the last five years. This is a marked increase in the prevalence rate recorded by previous surveys. We cannot be certain if this is due to an increase in sexually harassing behaviours, or to greater awareness of the types of behaviours that constitute sexual harassment, or to other factors. What we are certain of is that this is a problem that affects millions of Australians and we, collectively, have a big job ahead to tackle the problem.

You can read the full report here.

The National Inquiry team will be conducting public consultations in all capital cities and some regional centres across Australia to further develop their understanding of workplace sexual harassment, its causes, impacts and best practice responses.

Public consultations are open to individuals and organisations who would like to contribute to the national conversation on this issue, providing their views, experiences and suggestions for change.