Getting to the top

Is it possible to get to the top in architecture and have a satisfying family life, too? As 26-year-old architect Sarah Hurst approaches a milestone birthday, she takes stock of her achievements and ponders the future. 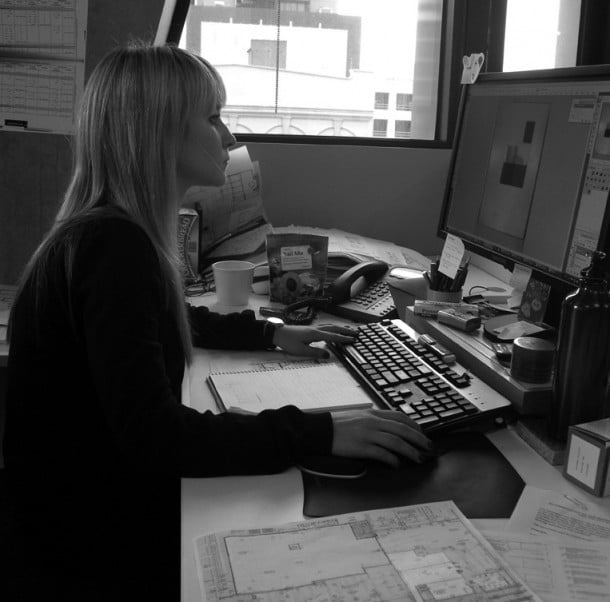 My 27th birthday is fast approaching and I’m quietly mindful of the fact that this is somewhat of a significant one; at least that’s what my subconscious keeps telling me. As a friend recently put it so eloquently, it’s my ‘shit or shine’ year. The year where I’m either going to make or break it, prove myself as a force in the industry and establish myself as a leader within my field or, alternatively, be eternally immortalised in the ‘27 club’, alongside some of the world’s most celebrated musicians who partied hard and died doing it; whose successful careers as influential songwriters were cut short by temptation and poor decisions. Perhaps that’s being a touch dramatic. Do architects really compare themselves to music legends?

The increasing reflection on my career in architecture to date (albeit short) comes as I start to create a mental map of the next three years, before I turn 30. I may be in the minority by saying this, but as a young woman expanding my professional career, I have goals set for myself to achieve before this milestone birthday. To be successful in my job, progress higher up the architectural ladder (no pun intended), take on more senior roles, more responsibility and earn a salary that reflects what I believe I’m worth. I’ve worked hard to be good at my job and set this path ahead of myself, and with continued strength and determination I am confident that I can achieve my goals.

But in the midst of my career expectations, I am also very conscious of my desire to start a family one day. The current debate on pregnant women being discriminated against in the workplace is feverishly topical, as is the ongoing discussion on work/life balance. To a certain extent I have been able to work somewhat selfishly up to now, without a family at home waiting and reliant upon my return each day. However, I am alert to the fact that this won’t always be the case and my priorities will one day be divided. To which the question emerges: what work flexibility will be available to me and will I continue to enjoy successful career growth?

A conversation with a recently expectant colleague highlighted that I’m not the only one with fears of having to choose between working and starting a family. Reflecting on 10 years of hard work and evident success, she questioned if she was really ready to give it all up. My immediate response was, of course, to provide reassurance. Having a baby was, by no means, the end of her days as a thriving architect. However, her words resonated with my own concerns.

I then aired my internal conflict with a friend. Would I be able to grow a successful and rewarding career post-baby? The response was far from appealing: perhaps this is the point where I should step aside to allow another willing and able youngster to step up. Having worked so hard for so long, would I be satisfied by this outcome? In reality, perhaps I wouldn’t have a choice.

The recent AJ Women in Architecture panel discussed the options for women (and men) returning to work following a stint of maternity/paternity leave. They suggested that although difficult to support career development working a three-day week (four days was looked upon more favourably), it was possible. In a recent report on the panel discussion for Parlour, Sze Wei Lee noted, “The question is how many companies out there are willing to adopt this approach?” The likelihood of success and chance for promotion following maternity leave was attributed to the work ethic previously demonstrated to an employer and sheer hard work and determination. Lee summed up: “Achieving a balance between work and family life won’t be easy. It is, however, possible if you want it badly enough. You will have to strive and work incredibly hard to get to where you want to be. If you live and breathe architecture and it is your passion, it will be worth it.”

In her Parlour article ‘A Lost Legacy’, Diana Griffiths reflects on her time since graduating, noting that the numbers of men and women who graduated with her were “almost equal”. She questions what happened to her female classmates and ponders what the built world might look like today, had her peers continued to work at the same rates they graduated in. “Recently … I have found myself wondering, where did all my female classmates go? Who are the success stories? The women who have made it through the ranks to be successful directors and award-winning architects?  In many cases this generation of women architects do not exist and their lost legacy is striking.” Griffiths goes on to say that women with children find it hard to meet the demands of overtime that many firms expect, to turn a potentially unprofitable job to a profitable one. These seem to be the realities in pursuing the infamous work/life balance.

As women, there is an obvious pressure in the workforce to prove ourselves and deliver results to our fellow colleagues and superiors, who in many instances happen to be men. But there seems to be an additional pressure that we put on ourselves to achieve a level of success before the ticking of our biological clocks becomes unsilenceable. In the examples of part-time working mothers I’ve known and worked with, there is an intense dedication and drive to both deliver and be responsible for the work they produce, and perhaps this comes partly from the appreciation of being allowed such flexibility. My turn at motherhood may be a while off, but as a woman in architecture I am focused on my future, both professionally and personally, and am excited about what lies ahead. But as I strive to have it all and become successful in my career while simultaneously enjoying motherhood, I understand that getting to the top and staying there might be harder than I first thought.

Previous postWhy working for free is not OK Next postGoing Beyond