The state of gender equity in Australian Architecture

The research is in. Naomi Stead reports on the outcomes of the three-year Equity and Diversity research project for the AA Dossier.

Shall we start with the pleasant news, or the dreary? Well, the good news is that today there are numerous outstanding and successful women working in architecture in Australia. Women enter the architecture schools in nearly equal numbers to men, where they perform just as well and graduate in comparable numbers. In work life, women’s levels of satisfaction are mostly on a par with men’s, they generally feel respected as part of a strong community of architects and there appear to be low levels of explicit discrimination. Yet despite this positive picture, a large proportion of women in architecture experience high levels of stress and disillusionment and many have left altogether. Overall, there is a strong perception of gender-based inequity, and the data tends to bear this out.

While the bad news may be less pleasing, the evidence is overwhelming: women are under-represented by every measure of participation in architecture. There is a striking scarcity of women in senior leadership and management roles; trained women tend to leave the profession by stepping sideways into aligned disciplines or not returning from a career break. There is evidence of gender-based pay inequity, and of the sidelining of both female and male architects working part-time, with women over-represented among those part-time workers. The ingrained long-hours culture of architectural practice impacts disproportionately on women. And while low pay, long hours and difficulty reconciling professional and family life are also problems for men in the profession, they impact on women in different and compounded ways.

The articles in this Dossier: The State of Gender Equity series represent the culmination of a long process, a vast amount of research and a major collaborative enterprise. It is concerned with basic questions about how architects work, how they would like to work, how women work in patterns that differ from men and how these patterns can lead to inequitable effects. Over more than three years we have sought answers to these questions, and some are collected and published here for the first time. But going further than “pure” research, the project has also been interested in applied outcomes – in making an impact. And it is fair to say it has been remarkably successful in this – through the development of new online communities via the website Parlour: Women, Equity, Architecture, through informing gender equity policy and initiatives at the Australian Institute of Architects and through taking our own direct actions such as the Parlour Guides to Equitable Practice. 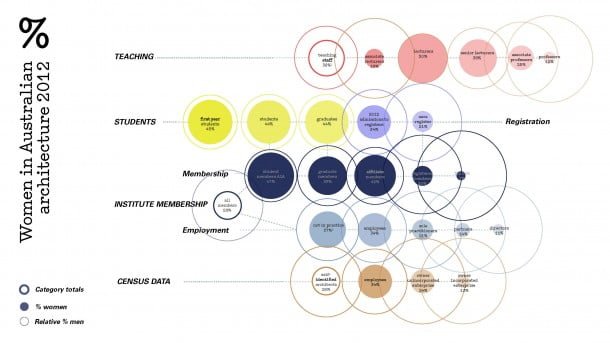 This was all undertaken under the umbrella of the research project Equity and Diversity in the Australian Architecture Profession: Women, Work and Leadership, funded by the Australian Research Council under the Linkage Projects scheme. I was the leader of the project, along with Justine Clark and a team of six other researchers from the University of Queensland and the University of Melbourne, all of whom have contributed to this Dossier. The project also had five industry partners: the Australian Institute of Architects, Architecture Media, BVN, Bates Smart and PTW Architects.

This project builds on the work of numerous others – the myriad activists and advocates who have worked for more than a century for gender equality in architecture in this country. It also builds on the work of past researchers, most notably Paula Whitman’s report Going Places: The Career Progression of Women in the Architectural Profession, and we salute Whitman and her landmark work in this area.

There is no doubt that the architecture profession can and will change to become more inclusive, more flexible and more equitable. Indeed, it must change if it is to survive. Gender equity is not an extraneous cost that the industry can’t afford, but rather a way of ensuring the ongoing economic viability, innovation and sustainability of the profession – even aside from questions of fairness, justice, morality and ethics. The question is not whether we can afford gender equity, but whether we can afford not to pursue it and to miss out on its benefits. Only if architecture becomes more inclusive – and equitable – will the profession be able to fulfil its own potential.

Note: This is the introduction to the AA Dossier: The State of Gender Equity, published in Architecture Australia vol 103 no 5 (September/October 2014) and also available online. Read the other pieces in the dossier here.