The proposed amendments to the Australian Sex Discrimination Act and the Religious Discrimination Bill are state-sanctioned violence against transgender people.

Simona Castricum outlines this very serious challenge and explains what we can all do to stand up, stop this, and work to break down destructive myths about trans people. 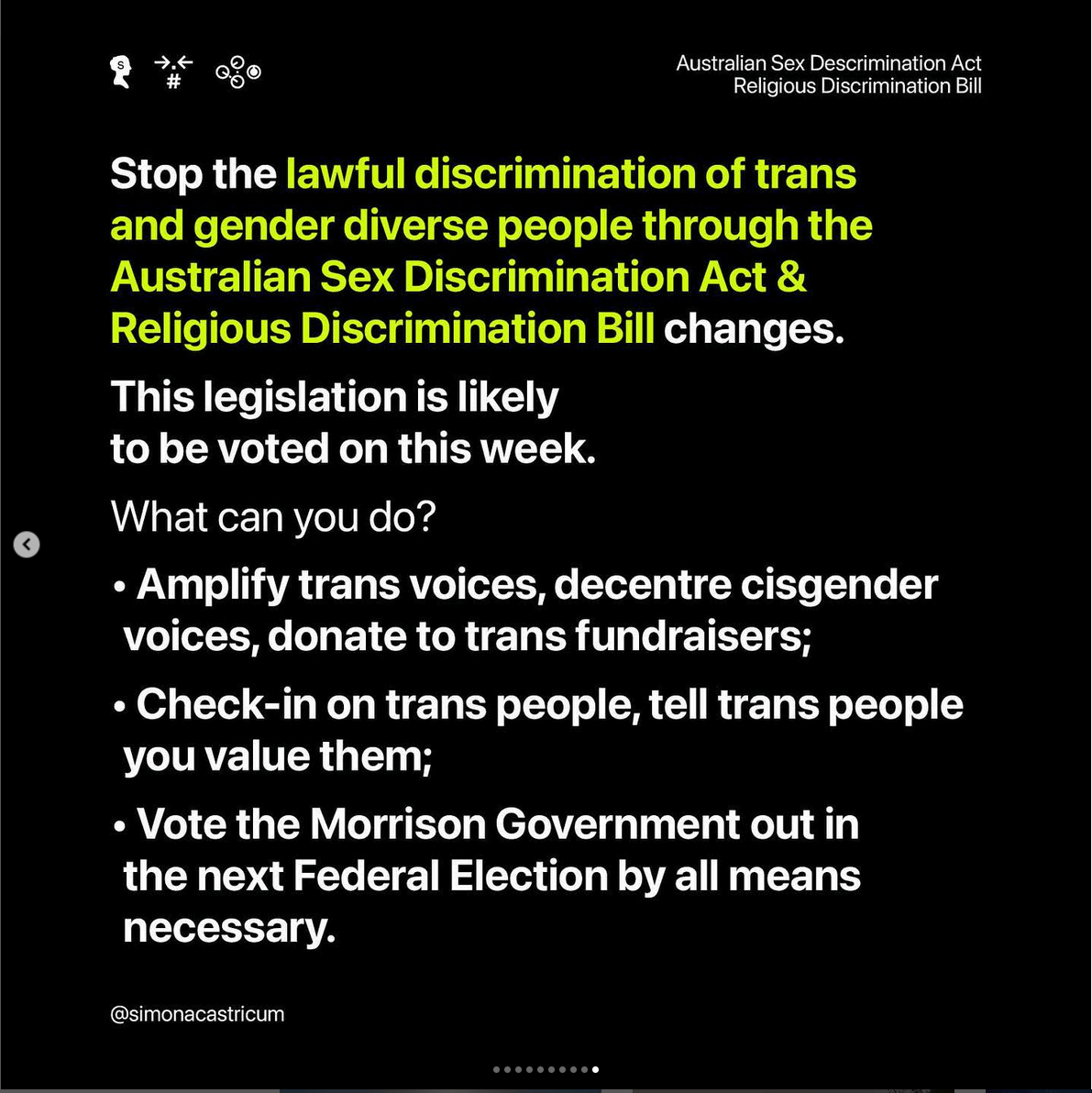 The proposed changes in the Australian Sex Discrimination Act and the Religious Discrimination Bill put forward by the Liberal/National Morrison Federal Government mean that ­– while students cannot be discriminated against based on sexuality – schools maintain the right to lawfully expel and discipline trans and gender diverse students, as well as dismiss trans and gender diverse teachers and staff for religious reasons.

Transphobia will become a lawful option in religious school handbooks.

Finance Minister and Senate Leader Simon Birmingham stated on 8 Feb that the intention of the ASDA change: “is to repeal the exemption as it relates to sexual orientation, [but] it doesn’t go further than that [i.e., gender identity]”.

Acting alongside the proposed Religious Discrimination Bill will directly affect how gender is administered, disciplined, punished and excluded in religious institutions like schools, putting trans and gender diverse kids and staff at risk of harm.

This means expulsion, detention, and punishment from school upon religious grounds – simply for being trans.

It directly affects how administration and categorisation of gender norms deny trans people’s right to civic life. It seeks to override recent gains in trans rights for states and territories.

It also seeks to effectively give schools the legal basis to erase and displace trans students and teachers, forcing them to live in fear and hiding. This creates unsafe educational settings for trans and gender diverse kids.

We need safer education settings where trans kids can emerge into their futures.

The proposed legislation calls for ongoing, state-sanctioned transphobia and cissexism. This legislation has dire consequences to a transgender cohort who are already suffering significant hardship in suicide, mental health, violence, bullying, and societal exclusion.

Its use of structural violence is deeply sinister in its execution and intention. It is violence.

This change extends to the imposition of harmful gender norms applied to the school curriculum, uniform, amenity and space access and design, social organising, team sport, cultural activities, and the disciplinary methods of religious schools.

“Issues around gender identity are far more complicated—they go into complex areas like use of facilities, use of changing rooms, sporting activities, a whole range of things where there are some very genuine concerns from other students that need to be taken into account as well.” — Mark Spencer, Christian Schools Australia

My question to the CSA is:

What are these ‘genuine concerns’, given there is no evidence that trans and gender diverse people are perpetrators of violence or harm? The opposite is true. While trans people are far more likely to experience violence and abuse, the denial of trans and gender diverse people to live authentically, access space, and be included in civic life enact significant harm in early childhood and adulthood.

Whether it exists as an event of discrimination, a test case, an option or a threat, this legislative shortcoming serves as an act of control and intimidation. It ensures schools become ongoing sites of control and punishment that disproportionately harm trans kids.

Schools have no place in the administration and policing of gender.

These legislative changes encourage transphobia via the principal’s desk to the locker room corner. That’s how school discipline works.

The proposals allow religious schools to lawfully weaponise the discipline and punishment of children deemed ‘divergent’ – in this case, trans kids – as a means of executing control and achieving docility in student populations.

It also validates the motivations of school bullying because both the school and the state have sanctioned this behaviour as ‘ok’.

Well, this is not ok.

This also harms trans and gender diverse people intergenerationally, who have experienced systemic abuse through the education and religious system, and their complicity in conversion therapy practices.

This changes to the ASDA is likely to be voted on this week.

What can you do?

Although we fight to live another day, I’d rather we thrive to live another way. Trans people are not broken, we are not the moral decay, we are not a threat – despite those who would rather see us that way. It acts as the central mythological premise to deny trans people their dignity and rights in civic life. Cisgender people created this myth, and it’s a myth cisgender people must work to breakdown.

Our transness is our gift, it’s our futurity – collectively and individually. Protecting trans youth is to protect all trans lives. 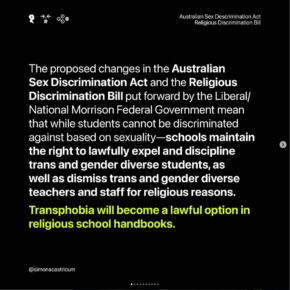 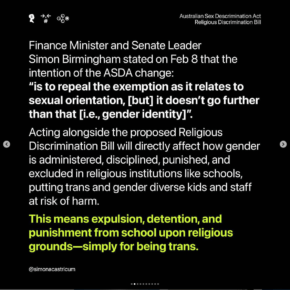 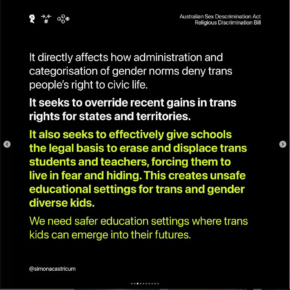 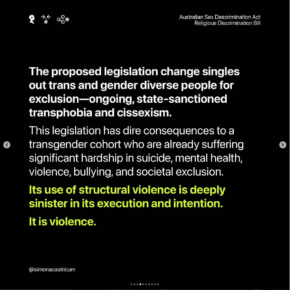 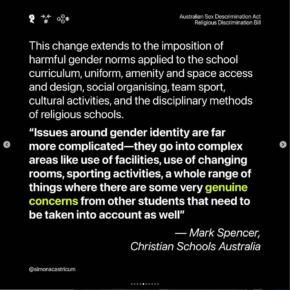 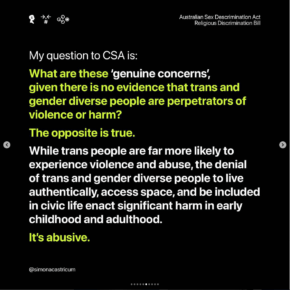 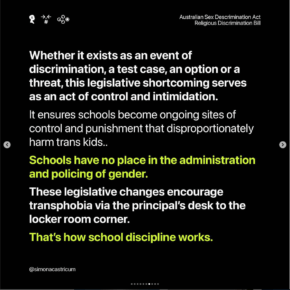 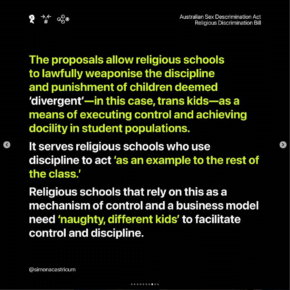 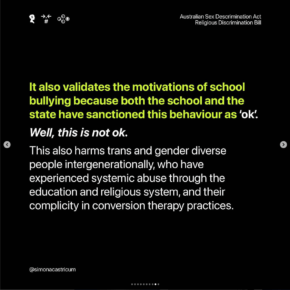 Simona Castricum is a multidisciplinary creative and academic working at the intersection of music and architecture on Wurundjeri land of Kulin Nation. Her work explores queer and trans intersections in architecture, public space, and civic life. Simona is a musician, DJ and producer and runs 100% independent record label Trans-Brunswick Express. Simona is an educator and PhD candidate in Architecture the Melbourne School of Design at the University of Melbourne, and a community radio broadcaster at 3RRR Melbourne.

Simona is a Parlour Associate.

This article is republished with permission from Simona’s instagram account, and is drawn from her PhD work.

Previous postSay It Loud Naarm Next postLightening the Load 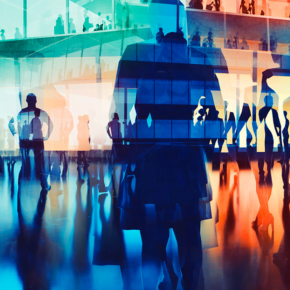 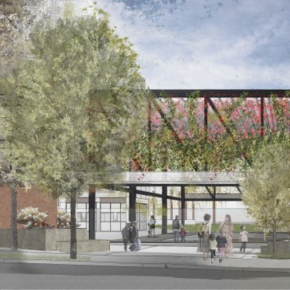 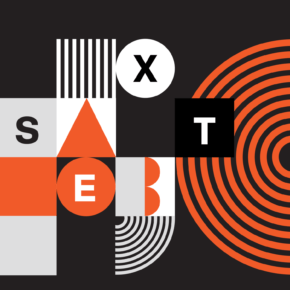